Trump aide plays down prospect of ending ‘one China’ policy 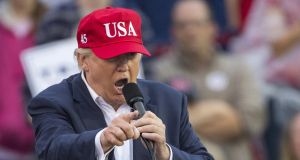 President-elect Donald Trump tweeted that the US should let China keep a US drone it seized. Photograph: Mark Wallheiser/Getty Images)

US president-elect Donald Trump’s incoming White House chief of staff on Sunday played down the prospect that Mr Trump would revisit Washington’s decades-old “one China” policy, even though he suggested as much a week ago.

Since 1979, the United States has acknowledged Taiwan as part of “one China” but Mr Trump prompted a diplomatic protest from Beijing after he accepted a congratulatory phone call on his election win from president Tsai Ing-wen of Taiwan on December 2nd.

“He is not president right now and he’s respectful to the current president,” Mr Priebus said.

Last Sunday, Mr Trump himself said in an interview on Fox News Sunday: “I fully understand the ‘one China’ policy, but I don’t know why we have to be bound by a ‘one China’ policy unless we make a deal with China having to do with other things, including trade.”

Political analysts said that Mr Trump’s call with the president of Taiwan and the comments on the “one China” policy could antagonise Beijing.

Mr Trump also inserted himself on Saturday into another sensitive dispute between China and the United States after China on Thursday seized an underwater drone owned by the US military in the South China Sea. Mr Trump called the seizure an “unprecedented act” – correcting an earlier tweet which read “unpresidented”.

US officials described the seizure as the first of its kind in recent memory. It was taken about 50 nautical miles northwest of Subic Bay off the Philippines just as the USNS Bowditch was about to retrieve it, the officials said.

Although China vowed to return the drone to the United States, Mr Trump later tweeted that the US should let China keep it.

Mr Priebus on Sunday defended the comments on the drone, saying he does not believe Mr Trump’s comments were provocative and that “80 per cent” of Americans agree it was inappropriate for China to have seized the drone in the first place.

Republican senator John McCain, chairman of the Senate Armed Services Committee, told CNN’s State of the Union that the Chinese would be able to retrieve some “pretty valuable” technical information from the drone through a process known as reverse-engineering.

Mr McCain said the Chinese seizure of the drone was a “gross violation” of international law. Mr McCain, a critic of president Barack Obama’s foreign policy, said the United States was not projecting enough strength in the world and said China’s move reflected that.

“Everybody is taking advantage of it, and hopefully that will change soon,” Mr McCain said.