Fears of violent protests in DRC as Kabila’s mandate expires 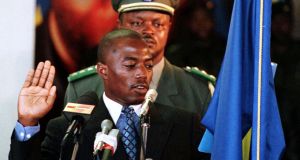 The Democratic Republic of the Congo is bracing for violent protests and riots when the mandate of President Joseph Kabila, who critics accuse of seeking to hold on to power indefinitely, expires on Monday.

Hundreds of armed police have set up checkpoints around Kinshasa, the capital, while soldiers in armoured vehicles have been deployed to strategic points in the sprawling city of 12 million.

Flights into the DRC have been empty, while family members of the country’s wealthy elite have rushed to safe havens in neighbouring countries, South Africa or Europe.

Many others in Kinshasa are stockpiling food and fuel supplies, in anticipation of a prolonged crisis. The stretched United Nations mission has redeployed some troops from peacekeeping operations in the east of the country to reinforce its presence in the capital. The British and US embassies have withdrawn all non-essential staff and warned against all travel.

Observers fear the vast central African country, which has never known a peaceful transfer of power since gaining independence from Belgium in 1960, could plunge into a prolonged period of damaging, and possibly very violent, instability.

Ministers loyal to Kabila, who won elections in 2006 and 2011 but is constitutionally limited to two terms, say logistical and financial problems make it impossible to hold fresh elections within 18 months.

The crisis has been building for several months. Both negotiations and protests have intensified as the end of Kabila’s mandate approaches.

In September, more than 60 died when security forces opened fire on an opposition march calling for Kabila to step down. At least four policemen were lynched.

Though opposition leaders said they would not call for mass demonstrations on Monday, most observers believe some protests are likely, and could result in violence.

“Wait and see,” said Felix Tshisekedi, a leader of the UDPS party.

Last-minute talks brokered by the Catholic Church between government representatives and a coalition of opposition groups failed to reach agreement on Saturday, but are scheduled to start again next week after bishops visited Rome to consult Pope Francis.

Last month the pope urged political actors in the DRC to “build bridges, not walls”. Tshisekedi said the government was not serious about negotiations.

Government officials blame the opposition for the lack of progress in reaching a settlement.

A key question now is the degree to which opposition parties can channel widespread popular discontent – or are seen as part of the problem rather than a potential solution by ordinary people.

Members of the UDPS, which is led by the 84-year-old veteran Etienne Tshisekedi, the father of Felix, said they would force Kabila from power through “civil” protest.

High inflation, the devaluation of local currency and flagging investment are causing deep economic hardship throughout the country, where two-thirds of the estimated 70 million population live on less than £1.50 every day.

“It is very difficult to live. Every week is harder. No one has money. No one has jobs,” said Annie (45), who runs a street stall selling fried chicken and rice in the Matongi neighbourhood.

Youth unemployment is extremely high, and football matches, which attracted large crowds of young men, have in effect been banned.

“We do nothing all day. Not because we are lazy, but because there is nothing for us to do. It has to change. Kabila has to go. We are prepared to die to see him go, and there are many of us. That is our strength,” said Thierry (28), as he watched other young men play dice.

The government, which has been accused of human rights abuses by campaign organisations, has moved to quell any disturbances.

Last week, authorities ordered the blocking of social networking websites, including Facebook and Twitter, from late on Sunday night. There have also been unconfirmed reports of arrests of activists.

A group of 80 women’s organisations in the DRC has also called for Kabila to step down to allow a peaceful transfer of power.

Close associates of the president said Kabila had no intention of remaining in office indefinitely and wanted to leave a “legacy of democracy” to his “fellow countrymen”.

In 2006, Kabila oversaw the first free vote in decades, ushering in a period of relative stability and economic growth as mining firms invested billions of dollars.

But many observers now fear a return to the brutal civil wars that killed an estimated five million people in the DRC between 1997, when the dictator Mobutu Sese Seko was ousted after a 32-year rule, and 2003.