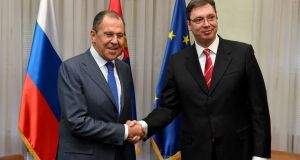 Serbian prime minister Aleksandar Vucic is due to visit Russia this week to discuss trade and a deal for fighter jets between the two countries, amid growing intrigue and competition in the Balkans between Moscow and the West.

Mr Vucic angrily cut short a trip to Brussels last week and blamed Croatia for blocking Serbia’s European Union accession talks, while Russia hailed its relations with Belgrade and accused the EU of trying to drive a wedge between them.

Regional tension has risen in the wake of an alleged coup attempt by Serbian and Russian nationalists against the pro-western government of Montenegro. One of the Serbs accused of involvement in the plot was photographed alongside Russian foreign minister Sergei Lavrov in Belgrade last week.

Mr Vucic is expected to sign a deal in Moscow on Wednesday for six MiG-29 fighter jets, which he has said will “deter anyone who would like to attack us”.

Russia will hand over the ageing warplanes for free, and Mr Vucic said he expects them to be delivered to Serbia by next March and then undergo work to extend their service lives for 14 years.

While in Belgrade, Mr Lavrov said Moscow was keen to help Serbia boost its defence capacity and to discuss a free trade deal between the EU candidate country and a Russian-led bloc of ex-Soviet states called the Eurasian Union.

Mr Lavrov also accused the EU of pressing Belgrade to join in western sanctions against Moscow, and to close a joint “humanitarian centre” in southern Serbia that is officially a base for emergency response and training.

He said the EU regarded the centre as “as a nest of spies and a threat to European security” and claimed that “Brussels demands that Serbia close the centre if it wants to join the EU”.

Mr Lavrov said the EU wanted Mr Vucic and colleagues to “behave in the same way as the leader of Montenegro, who betrayed all [his] commitments and promises and betrayed Russia”.

Mr Djukanovic’s party narrowly won the vote, but only after Montenegro’s security services announced they had foiled an election-day plot to kidnap or even kill him, and to seize power and reverse the country’s westward course.

Montenegrin prosecutors named two Russians among a number of people wanted for questioning, but their whereabouts are not known.

Also on that wanted list is Serbian citizen Nemanja Ristic, who appeared in a photograph standing with other Serb nationalists as they met Mr Lavrov in Belgrade; Mr Ristic said he ended up in the shot “by accident” and denies involvement in the alleged coup attempt.

Mr Dacic said Serbia must boost its defences in response to a strengthening of Croatia’s military since it joined Nato in 2009, and denounced what Belgrade calls Zagreb’s attempt to hamper its EU accession talks. The two states fought a bitter 1991-95 war during the collapse of Yugoslavia.

“If Croatia is the one to decide if Serbia will become an EU member, then I have suddenly lost interest,” Mr Dacic said.

Croatia blocked EU accession talks with Serbia on education issues last week, due to a row over school textbooks for Serbia’s Croatian minority.

“Serbia was patient so far, but now it will talk differently,” Mr Vucic said as he left Brussels early.