Trump again touts anti-malaria drug as deaths in US pass 10,000 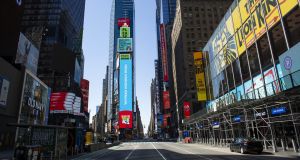 Deaths from coronavirus in the United States have now surpassed 10,000, though New York governor Andrew Cuomo on Monday pointed to a “plateauing” of cases in the state in recent days.

The total number of Covid-19 cases across the US was expected to reach 350,000 on Monday evening, with New York accounting for about a third of those.

The death toll in New York was 4,758, with 599 people dying in the state on Sunday alone, Mr Cuomo said at his daily press briefing. But he noted that the number of deaths had been “effectively flat” for two days, with the numbers being admitted to hospitals and to intensive care units also down.

“While none of this is good news, the possible flattening of the curve is better than the increases that we have seen,” he said.

Nonetheless, he announced that schools and non-essential businesses would remain closed until April 29th, as he warned against complacency.

“There is a real danger in getting overconfident too quickly. This is an enemy that we have underestimated from day one and we’ve paid the price dearly . . . Other places have made that mistake,” he said, mentioning Hong Kong and South Korea.

He also said he would ask president Donald Trump to allow the navy ship docked on Manhattan’s west side to start accepting virus as well as non-virus patients, following revelations that the 1,000-capacity hospital ship was treating only a few dozen people.

Despite the tentative positive signs in New York, the pandemic continues to take lives across the country. New Jersey has reported more than 1,000 deaths from the virus. Deaths in Michigan have passed 600, mostly in the Detroit area. Louisiana also remained a source of concern with the number of deaths jumping by almost 40 per cent at the weekend to 512.

Meanwhile, the governor of Wisconsin announced that the presidential primary and a series of local and state elections that had been scheduled to take place on Tuesday would be postponed until June. The decision followed strong criticism from Democrats that the Republican-controlled state legislature – which failed to postpone the ballots at a sitting on Saturday – was trying to suppress voter turnout. The decision by the Democratic governor Tony Evers could be subject to a legal challenge.

The PGA Tour released new dates for three major golf tournaments which had been postponed due to coronavirus. The PGA Championship will take place between August 6th and 9th, the organisation said, the US Open has been rescheduled for September, while the Masters will take place a week after the presidential election in November.

As the US death toll passed 10,000 officials have warned that the country could face its toughest week yet in the battle against coronavirus. Mr Trump said late on Sunday that the pandemic will “peak” in the next few days.

For the second consecutive day he also touted the anti-malarial drug hydroxychloroquine as a treatment.

He advised Americans without a heart condition to consider the drug, and he noted that the government had purchased and stockpiled 29 million pills of hydroxychloroquine.

“A lot of drugstores have them by prescription and they’re not expensive,” he said. The drug, which is also used to treat rheumatoid arthritis, lupus and other autoimmune diseases, has not yet been approved for coronavirus treatment by the Food and Drug Administration.

Asked why he was promoting the medicine, he said: “I’ve seen people who are going to die without it . . what really do we have to lose?”