Attempts to seal off areas from rest of Russia ‘unacceptable’, says prime minister 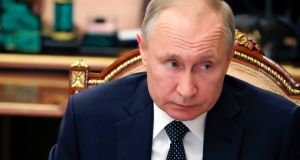 President Vladimir Putin listens during a meeting in the Kremlin, in Moscow, on Monday as the country recorded its biggest daily rise of 954 new cases. Photograph: Mikhail Klimentyev/Sputnik/Kremlin Pool Photo via AP

Russia’s government has warned regional leaders against overstepping their authority as it struggles to co-ordinate its response to the accelerating spread of coronavirus across the world’s largest country.

Another 954 cases of coronavirus, also known as Covid-19, were confirmed on Monday, in Russia’s biggest daily rise so far. Officials say 6,343 people in the country of 140 million are now known to have caught the virus, at least 47 of whom have died.

President Vladimir Putin has told Russia’s non-essential workers to stay at home until April 30th, but he has declined to tap federal funds to support private businesses and he has put regional governors from the Baltic to the Pacific in charge of managing the outbreak and its economic impact on their various territories.

The Kremlin’s approach has led to a patchwork of different anti-virus regimes being introduced across Russia, with several regions announcing that they would not allow travellers and goods from other areas to enter.

Russian media report that roadblocks have been set up in a few towns to keep out non-residents, and cities including Tomsk, Norilsk, Krasnoyarsk and Irkutsk have made 14-day quarantine compulsory for people arriving from Moscow and St Petersburg, which have registered most of the country’s Covid-19 cases.

Russian prime minister Mikhail Mishustin said on Monday that Mr Putin had given regional leaders “additional powers to choose which restrictive measures are best for each particular territory” and noted that most had “coped with this work”.

“At the same time, there were precedents last week that saw the leaders of some regions close their administrative borders, preventing the movement of people and transport onto their territory,” he added.

“Government signals about the unacceptability of such measures were heard, and over the weekend the situation improved. However, I want to tell regional leaders again: do not confuse regional powers with federal powers.”

Kremlin spokesman Dmitry Peskov said some steps taken locally had been “excessive”, but he insisted that transport restrictions only required “fine tuning”.

The power struggle between the capital and the provinces is as old as Russia, and after taking office 20 years ago Mr Putin moved to centralise control.

While keeping most regional chiefs on a tight rein, Mr Putin has given a unique degree of leeway to Ramzan Kadyrov, who has used terror tactics and massive federal investment to quell unrest in Chechnya.

The former guerrilla said Chechnya would be sealed off from Sunday, but his spokesman said on Monday that “strict controls” rather than full border closures had been introduced.

Mr Kadyrov has backed the use of violence to enforce self-isolation in his North Caucasus republic, and said that people breaking quarantine should be thrown into a pit and left to die there if necessary: “A terrorist could kill a few people but someone who’s infected could kill tens of thousands,” he explained.