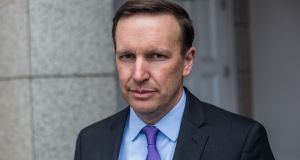 US Democratic Senator Chris Murphy: ‘We want to send a signal about the value that we place on multilateral organisations, especially at a moment when the EU is under threat.’ Photograph: James Forde/The Irish Times

A trade deal between the European Union and the United States should be prioritised over a US trade deal with Britain, Democratic senator Chris Murphy said on Thursday as he stressed the Good Friday Agreement must be “kept intact in its entirety”.

“Many of us are breathing a half-sigh of relief, as we hear these commitments being made again to keep intact the Good Friday Agreement,” he said.

“I think that from my perspective one of the ways that we can continue to support the Good Friday Agreement is to make sure that we are keeping on track a trade agreement with Europe – difficult to achieve, but certainly not impossible — and certainly we will continue to build this bipartisan message of support that me and Senator Toomey sent.

“It’s not to say a US-Britain trade agreement isn’t important,” he said, “but I do think that we want to send a signal about the value that we place on multilateral organisations, especially at a moment when the EU is under threat.”

Britain had been in trade talks with the US during the Trump presidency, but Congress had threatened to veto a deal if the Good Friday Agreement was undermined.

There are concerns in London that Mr Biden will be less willing to prioritise a UK-US trade deal, though it is understood the president-elect did not rule it out during his phone-call with prime minister Boris Johnson last month. Mr Trump was a strong supporter of Brexit and seen as a close ally of Mr Johnson.

Mr Varadkar, a former participant on the Washington Ireland Programme when he was a student, thanked the US for the support it had shown Ireland throughout the Brexit talks. “I think the role of Congress on a bipartisan basis, but particularly led by the Speaker Nancy Pelosi and the comments of president-elect Joe Biden in recent weeks, did make a difference, did send a message to anyone in London who might think otherwise.”

Ms O’Malley Dillon, the incoming deputy White House chief of staff and board member of the Washington Ireland Programme, said that Mr Biden was extremely proud of his Irish heritage.

“Obviously the president-elect is a proud Irish-American, and I think so much of the leader he is, the story of his life, his life of resilience and leadership, where he comes from… his roots… there is no doubt that that’s a big part of who he is.”

Asked if Mr Biden planned to visit Ireland, she said that, speaking for herself, she hoped to visit again. “I would be happy to encourage him to come along,” she said.

Originally from Boston, she has been involved with the Washington Ireland Programme since 2014 and has visited Dublin and Belfast. She is one of several Irish-Americans who are close to Mr Biden – the first Irish-American to become president since John F Kennedy.

The Washington Ireland Programme brings young leaders from the Republic and Northern Ireland to Washington DC every summer for two months.

Earlier on Thursday, the Washington Ireland Program was honoured by the American Chamber of Commerce with a special recognition award. Announcing the award in Washington, Ireland’s ambassador to the United States Dan Mulhall, praised the programme’s track-record in developing leaders. He also highlighted its commitment “to fostering peace and prosperity in Northern Ireland and Ireland while also enabling participants to build relationships across the Atlantic which will be vital for the further development of Irish-American relations in the years and decades to come”.

Launching the 2021 programme, executive director Bryan Patten said that, like other organisations, the Washington Ireland Programme had to reimagine itself in 2020 due to the Covid-19 pandemic.

“While students weren’t able to travel to the US, we were able to give them access to global leaders from their homes in Ireland. In addition to working with leading offices remotely, this year’s class had the chance to talk with leading figures in politics and policy on issues of climate, equality and economic change,” he said.

Due to the ongoing pandemic, he said that the organisation will continue to use technology to deliver the program next year, but he expects that in-person events will take place in Belfast and Dublin when restrictions lift.