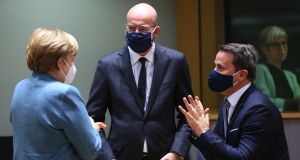 European Union leaders reached an agreement to overcome a last-minute blockade of a €1.85 trillion budget and recovery package by Hungary and Poland in a summit in Brussels.

Warsaw and Budapest exercised a last-minute veto over the package in opposition to a new link between access to funds and respect for the rule of law, which they feared could deprive them of funds as both are accused of undermining democratic institutions.

But they were persuaded to drop their blockade in an agreement brokered by the current holder of the rotating EU presidency, Germany, that does not alter the rule but is seen as likely to slow down its implementation.

Countries that oppose the measure will be able to challenge it in the European Court of Justice, and the European Commission will commit not to use it until the court has ruled on the mechanism. This process could significantly delay the use of the new rule, perhaps even until after Hungarian prime minister Victor Orban faces elections in his country in 2022.

Nevertheless, the agreement was hailed as a landmark moment for the EU, clearing the way for a massive programme of joint borrowing that has been described as a watershed in integration for the bloc.

“Now we can start with the implementation and build back our economies,” the president of the European Council Charles Michel wrote. “Our landmark recovery package will drive forward our green and digital transitions.”

The bulk of the money, €1.1 trillion, will make up the 2021-2027 budget for the bloc, while €750 billion is a once-off recovery fund aimed to counteract the economic damage of the Covid-19 pandemic.

The money will be allocated to member states in grants and loans earmarked for investments to modernise and make green their economies, such as broadband and digitalisation schemes or projects to make energy and transport systems carbon neutral.

Earlier, Taoiseach Micheál Martin said he hoped to use the funds to green Ireland’s economy and digitalise public services, including Ireland’s health service.

“It’s an opportunity for us . . . It demonstrates to the citizens of Europe that we can work effectively against a global pandemic.”

The packed summit agenda also included discussions of Covid-19 vaccination co-ordination, sanctions on Russia and Turkey, and plans to relaunch the transatlantic alliance with the incoming administration of United States president-elect Joe Biden.

Still under discussion late on Thursday was a joint commitment to cut carbon emissions by 55 per cent compared with 1990 levels by 2030, ramping up the bloc’s climate ambitions as it aims for total carbon neutrality by 2050.

The target has broad support, The Irish Times understands, but there were differences among member states over how to achieve it through concrete policies, such as whether nuclear power should be part of the energy mix.