Tornadoes kill six and damage hundreds of homes in southern US

Flash flood and thunderstorm warnings for Mississippi, Louisiana and Alabama 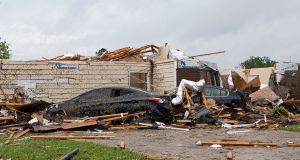 A home had its roof torn off after a tornado ripped through Monroe, Louisiana. Photograph: Nicolas Galindo/The News-Star/AP.

Strong storms have pounded the Deep South in the United States, killing at least six people in southern Mississippi and damaging up to 300 homes and other buildings in Louisiana.

Much of the region remains under flash flood, tornado and thunderstorm warnings.

The National Weather Service said strong winds were sweeping through other parts of Mississippi, and a tornado was spotted north of Meridian near the Alabama state line.

Mississippi governor Tate Reeves declared a state of emergency after he said several tornadoes had struck the state.

“This is not how anyone wants to celebrate Easter,” Mr Reeves said on Twitter.

The National Weather Service advised that thunderstorms would shift across the south-east and mid-Atlantic states on Monday, bringing potential tornadoes, wind and hail.

Around 750,000 people were without power in a 10-state swathe ranging from Texas to Georgia up to West Virginia, according to officials.

Before the storms moved into Mississippi, the weather service reported multiple tornadoes and damaging winds over much of northern Louisiana.

The mayor of Monroe, Jamie Mayo, said that the storm damaged 200-300 homes in and around the city in Louisiana. Flights were cancelled at Monroe Regional Airport.

In north-west Louisiana, officials reported damage to dozens of homes in DeSoto and Webster parishes.

In Morgan County, Alabama, a church roof and steeple were damaged by lightning.