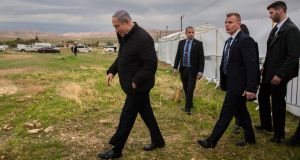 Prime minister Binyamin Netanyahu’s initiative to annex parts of the West Bank as part of the US Middle East peace plan has been met with opposition from an unlikely source: Jewish settlers.

The opponents include several prominent settler leaders, including David Elhayani, head of the Yesha umbrella settlers’ council, who warned that the plan would mark the first step towards the creation of an independent Palestinian state in the 70 per cent of the West Bank not earmarked for Israeli annexation.

Urging Israel to hold off on any unilateral move until clear-cut promises were received from Washington ruling out what he termed the creation of a “terror state in the heart of the land of Israel”, he said that Mr Trump was not a friend of Israel.

“Ultimately, he presented a plan that endangers the existence of Israel. If someone comes at me with a cake and puts a gun to my head, will I take the cake and say to them ‘Thank you?’ The plan contains existential dangers.”

His comments were quickly rebuked by Mr Netanyahu.

“President Trump is a great friend. He has led historic moves for Israel’s benefit. It is regrettable that instead of showing gratitude, his friendship has been repudiated.”

Mr Netanyahu has vowed to bring the annexation plan before the cabinet next month even though a joint Israeli-American team mapping out the boundaries of the areas to be brought under Israeli control has not completed its work.

The areas to be annexed comprise roughly 30 per cent of the West Bank – which Israel captured from Jordan in the 1967 Six-Day War – including the sparsely populated Jordan valley, which runs along the western bank of the Jordan river, and most Jewish settlements.

Other settler leaders support Mr Netanyahu’s annexation plan. Asaf Mintzer, mayor of the Elkana settlement, said this was a historic opportunity not to be missed.

“The settler movement has been waiting for 50 years for the application of Israeli law. Are we going to throw that away? First we have to accept what is on the table.”

Earlier this week Israeli defence minister Benny Gantz ordered the military to begin preparing for the consequences of annexation, which could spark Palestinian unrest.

The Palestinians – who claim all the West Bank, Gaza and east Jerusalem as an independent state – have dismissed the Trump plan as biased towards Israel and a denial of their rights.

Palestinian president Mahmoud Abbas said he was ending “all agreements” with Israel and the United States in response to the annexation plan.

The poll also found that 58 per cent of the Israeli public believe the application of Israeli sovereignty will prompt the Palestinians to respond with a new intifada uprising.