Three white men indicted with murder of black jogger in US 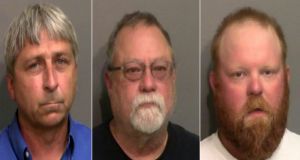 Three white men arrested last month in the killing of a Black man who was gunned down as he jogged through a suburban neighbourhood in Georgia four months ago were indicted on Wednesday on murder and other charges.

Video footage showing the killing of Ahmaud Arbery (25) in the coastal Georgia town of Brunswick emerged on social media and went viral in May, some 10 weeks after his death, stoking public outrage at the lack of arrests at that time.

On Wednesday, a grand jury returned a nine-count indictment against all three men, charging each with malice murder, felony murder, aggravated assault and false imprisonment, the indictment shows. The three remain jailed without bond.

The McMichaels told police they suspected Mr Arbery was involved in a string of neighbourhood burglaries when they spotted him running in the street and said they chased him down in their pickup truck to make a citizen’s arrest.

Mr Bryan’s attorney Kevin Gough, issued a statement on Wednesday insisting his client was merely “a witness to the tragic shooting death” and had fully co-operated with investigators from the start.

The indictment supersedes charging documents already filed against the three men and spares prosecutors the legal hurdle of having to prove to a judge they have sufficient evidence to proceed to trial.

The US Justice Department is investigating whether grounds exist for federal hate-crimes charges.

A Bill newly passed by the Georgia legislature allowing for stiffer sentences when a victim is shown to have been targeted because of race is not retroactive and cannot be applied in the Arbery case, Mr Merritt said.–Reuters