Chris Krebs, head of the cybersecurity, said his department had ‘utmost confidence’ in integrity of election 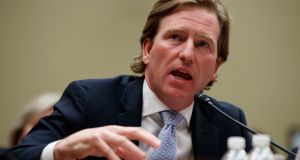 Christopher Krebs was fired as the director of the Department of Homeland Security’s Cybersecurity and Infrastructure Security Agency. File photograph: Carolyn Kaster/AP 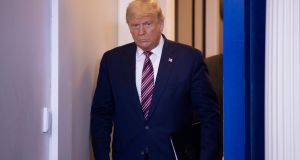 US president Donald Trump fired the top US official responsible for overseeing election security last night, claiming without evidence he made “highly inaccurate” assertions about the safety of the presidential election.

Chris Krebs, the head of the Cybersecurity and Infrastructure Security Agency, was dismissed by the president on Twitter. It follows a statement last week by the agency that the 2020 election was the most secure in history.

Announcing the decision on twitter Mr Trump wrote: “The recent statement by Chris Krebs on the security of the 2020 Election was highly inaccurate, in that there were massive improprieties and fraud — including dead people voting, Poll Watchers not allowed into polling locations, “glitches” in the voting machines, which changed votes from Trump to Biden, late voting, and many more.”

He continued: “Therefore, effective immediately, Chris Krebs has been terminated as Director of the Cybersecurity and Infrastructure Security Agency.”

The agency, which is part of the Department of Homeland Security, issued a statement last week asserting that the November 3rd election was “the most secure in American history.” It added: “While we know there are many unfounded claims and opportunities for misinformation about the process of our elections, we can assure you we have the utmost confidence in the security and integrity of our elections.”

Shortly before his dismissal on Tuesday, Mr Krebs said on Twitter that allegations that election systems were manipulated in the election “either have been unsubstantiated or are technically incoherent.”

Mr Trump has refused to accept the outcome of this month’s election, instead launching multiple legal challenges in several states, none of which have changed the result in any state.

Honored to serve. We did it right. Defend Today, Secure Tomrorow. #Protect2020

Meanwhile, officials in Michigan certified the election result in the state’s most populous county on Tuesday. Initially, the two Republicans on the four-member board of canvassers refused to endorse the results, prompting praise from Mr Trump. But they ultimately agreed to certify the outcome after reaching a compromise with their Democratic counterparts.

Mr Biden won the state of Michigan by almost 150,000 votes, but the president has questioned the outcome. All states must certify their results before December 14th when the electoral college meets to formalise the election outcome.

The president’s firing of Mr Krebs comes a week after he replaced defence secretary Mark Esper. On Tuesday, he announced a reduction in troops in Afghanistan and Iraq – a decision described by senate majority leader Mitch McConnell, also a Republican, as a “mistake.”

Meanwhile, president-elect Joe Biden is continuing with plans as he prepares to assume the presidency on January 20th, announcing a number of senior White House appointments on Tuesday.

Among those appointed to Mr Biden’s team are campaign manager Jennifer O’Malley Dillon, who will become deputy White House chief of staff, and Louisiana congressman Cedric Richmond, who has been appointed senior adviser to the president and director of the White House office of public engagement. Mr Richmond’s departure from Capitol Hill will open up a special election in Louisiana, but his New Orleans seat is in a safe Democrat district and is expected to remain in Democratic hands. Mr Richmond is the highest-ranking African-American so far to be appointed to Mr Biden’s team. Senior Biden campaign advisers Mike Donilon and Dana Remus have also joined the team, with Mr Remus becoming White House counsel.

Announcing the new appointments, Mr Biden said the team reflects his commitment to “building an administration that looks like America.” The announcements follow the appointment of Mr Biden’s long-term aide Ron Klain as White House chief of staff.

Though the new appointees will be among the most senior advisers in the West Wing, an announcement on cabinet members is not expected until after Thanksgiving.

The former vice-president also spoke with Israeli prime minister Benjamin Netanyahu and president Reuven Rivlin on Tuesday, as well as the leaders of India, Chile and South Africa.

Meanwhile, Senator Chuck Grassley announced he tested positive for coronavirus. The 87 year-old Republican spoke in the senate on Monday without wearing a mask, and had been self-isolating since Tuesday morning before his diagnosis was confirmed.

His possible exposure comes after House Speaker Nancy Pelosi was forced to cancel a dinner for incoming members in the US Capitol after outcry on social media about the decision to hold the gathering in the midst of the coronavirus pandemic.

Covid infection rates in the United States are continuing to rise, with 11.2 million cases and more than 247,000 deaths now recorded.