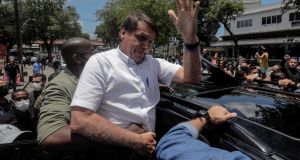 A second round of local elections in Brazil has provided further evidence that the political polarisation that lifted far-right politician Jair Bolsonaro to the presidency two years ago is receding.

Mr Bolsonaro saw candidates he backed lose in run-off rounds held on Sunday for control of key cities, with results confirming the resurgence of traditional, more centrist parties registered in a first round two weeks previously.

Brazil’s local elections are an important leading indicator for general elections because the country’s mayors are crucial in mobilising support for presidential candidates.

In the night’s biggest defeat for the president’s far-right agenda, the incumbent mayor of Rio de Janeiro, Marcelo Crivella, was routed by former mayor Eduardo Paes.

Mr Crivella, a bishop in a powerful neo-Pentecostal church, which is a key part of Mr Bolsonaro’s political base, failed to win a single city district in what was a crushing rejection after a campaign during which he warned a victory for his opponent could result in paedophilia in the city’s schools.

Mr Bolsonaro had initially targeted the elections for the debut of his new political party, Alliance for Brazil. But he failed to gather enough signatures to officially register it in time with electoral authorities and instead backed right-wing candidates from other parties.

The night’s big winners were the centre and centre-right parties that had seen their support plunge in 2018’s general election as their voters switched to Mr Bolsonaro, seeing him as the best bet for preventing the return to power of the left-wing Workers Party, the other big loser on Sunday.

It failed to win a single state capital and took only four of 15 cities it contested. Its poor performance confirms voters have not yet forgiven it for the economic recession and corruption scandals that marked the last of its 13 years in power, which ended with Dilma Rousseff’s impeachment in 2016.

But the candidate for the small Socialism and Liberty party captured 40 per cent of the vote in the country’s biggest electoral district, ensuring his future as a power-broker among the left.

The results among the left will increase pressure on the Workers Party to drop its insistence that its iconic leader Luiz Inácio Lula da Silva lead any left-wing ticket in presidential elections due in 2022.

The former president is legally barred from running because of a number of corruption convictions he is currently appealing.