‘I hear you’: Trump’s notes for shooting survivors meeting revealed 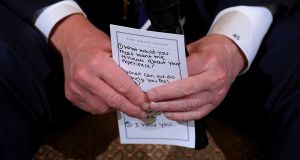 Briefing notes captured by photographers at US president Donald Trump’s White House listening session with survivors of gun violence show that he needed to be reminded to say “I hear you”.

Close-up pictures of the note revealed that it had five points, of which the first was a reminder to ask the question: “What would you most want me to know about your experience”. The second question listed is: “What can we do to make you feel safe?”

The president’s note also prompted Mr Trump to ask survivors for their ideas, or what resources they think might be needed.

But it is the final note - “I hear you” - that has attracted the most criticism, with the implication that without a prompt the president would be unable to show sympathy towards those affected by school shootings, some of whom had travelled from Florida for the occasion.

The meeting at the White House was attended by survivors of last week’s Florida school shooting. At the meeting, Mr Trump suggested he would consider arming teachers as a measure against school shootings. “It only works when you have people very adept at using firearms, of which you have many. It would be teachers and coaches,” he said.

During the election campaign in 2016, Mr Trump tweeted that opponent Hilary Clinton was lying when she suggested he would put more guns in schools.

The close-up photograph of the note also revealed Mr Trump was wearing a shirt with “45” embroidered onto the cuff.

Mr Trump did not appear to directly use any of the questions or phrases on the card at the meeting, but did thank those who had attended. “Thank you for pouring out your hearts,” Mr Trump said, “because the world is watching and we’re going to come up with a solution.” –Guardian