Shoestring campaign brings Evan McMullin, a Mormon, to brink of a famous upset in Utah

Independent US presidential candidate Evan McMullin speaks about his Utah values as some polls suggest he could cause a major upset in his home state. Video: Evan McMullin for President 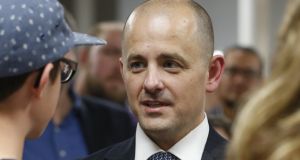 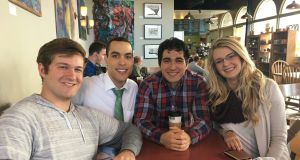 Left to right: Tyler Reese, Marcus Corbitt, Sean Miller and Cassidy Bronson Gundersen, in a cafe near the BYU campus, on the edge of Provo. Photograph: Ruadhán Mac Cormaic

Provo feels like a refuge from America’s troubles. An immaculate, low-rise city overlooked by the magnificent Wasatch mountain range in northern Utah, it’s a place that exudes comfort and wellbeing.

In its lifestyle-magazine vision of middle-class urban life, students sit at tables outside the juice bars and yoga centres on Center Street, children play in public parks and joggers run along the footpaths, taking in the clean mountain air. Because its population is overwhelmingly Mormon, most people don’t smoke, drink alcohol or take a coffee. Not surprisingly, Provo consistently tops lists of the most desirable places in the US to live, retire, open a small business or go to college.

The effect is to leave the city at a remove from some of the debates that have convulsed the US this election season. The local economy is strong, the jobs market is resilient, the crime rate and racial tensions are low and the population is one of the most highly educated in the country.

Yet Provo is emerging as the setting for one of the most remarkable subplots of the presidential election campaign. This is the hometown and political base of Evan McMullin, a little-known former CIA operative and political adviser whose last-minute campaign for the presidency has picked up such momentum that some polls give him a fighting chance of defeating Donald Trump in Utah, one of the safest Republican states in the country.

In a tight national contest between Trump and Hillary Clinton, a McMullin win here could even theoretically deprive both front-runners of the 270 electoral votes they need, thereby requiring Congress to choose between the top three candidates, including McMullin. (It’s a remote possibility: the data journalism site FiveThirtyEight puts McMullin’s odds of winning the White House at 0.4 per cent.)

A defeat for Trump in staunchly conservative Utah, which has supported only Republicans for president since 1964, would itself be the biggest upset of the election. Such is the alarm in the party that today, less than two weeks from polling day, Trump’s running mate, Mike Pence, will find himself not in a red-blue battleground but in Salt Lake City, capital of the Beehive State, attempting to fend off the McMullin insurgency.

A 40-year-old graduate of Brigham Young University, a Mormon college in Provo, McMullin – a devout Mormon – worked for the CIA for 11 years, mainly in the Middle East and north Africa, before becoming an investment banker and later a congressional aide to the Republican Party.

He has described how, aghast at the choice of candidates on offer in the election and frustrated by the failure of any prominent Republicans to put themselves forward as an alternative to Trump and Clinton, he decided in August to take on the task himself.

He got himself on to the ballot in 11 states, and with a shoestring budget – the campaign had $4,316 in the bank at the end of September, according to Federal Election Commission filings – has amassed an army of volunteers and enthusiastic supporters. At first, small groups would come to his meetings out of curiosity; now he draws in crowds of fervent supporters wherever he goes.

“When he dropped on to the scene, I realised that he was someone whose policies I agreed with, but I also felt he was a moral, sincere person,” says Tyler Reese, a 25-year-old student at BYU. Reese grew up in a strongly Republican family and he feels strongly about abortion and other social questions. He first sat up and took notice of McMullin when he took what Reece felt was a sensible stance on same-sex marriage in a TV interview.

McMullin said he believed marriage was between a man and a woman but added that the voters had taken a different position and he was happy to accept the will of the people. “I agree with him on the issue, but I also see that not everybody agrees with me, and that’s fine,” says Reese. “That’s up to the people to decide, and I think we should move on to other things. When Evan said that, it won me over.”

McMullin’s platform is rooted in Republican orthodoxy: he espouses a pragmatic foreign policy, free trade, greater power for states and lower taxes while opposing abortion and Obamacare. All of this plays well in Utah, where Mormons make up 60 per cent of the population. But the chief driver of McMullin’s success has been a widespread mistrust and disenchantment with Trump himself.

Sitting in a cafe near the BYU campus, on the edge of Provo, Sean Miller, a recent BYU graduate, recalls how he initially thought McMullin’s candidacy was a joke. Although Miller sees himself as conservative, he never considered voting for Trump, so he was trying to choose between Clinton and the libertarian Gary Johnson when McMullin started to gain traction. He liked what he heard.

“I knew the state was probably going to go to Donald Trump anyway, so I figured at least if I vote for Evan McMullin it makes me feel good about myself to know he is someone who stands for what I stand for.” If Clinton wins, he says, “that’s all right with me, because I still think she is better than Trump”.

For Mormons such as Reese and Miller, support for McMullin is driven by a sense that the Republican Party, in nominating the property magnate, has turned its back on the principles and values it always stood for. A strong showing for McMullin will send a message to the party that it must change or risk losing some of its core support, they believe.

“Quite frankly, I don’t identify with the Republican Party, because the Republican Party has left some of the core principles that it was founded upon,” says Cassidy Bronson Gundersen, who volunteers for the McMullin campaign. “Lincoln’s focus was rights. Now we have Donald Trump calling everybody awful names. I think it’s time for a new conservative movement, and Evan McMullin embodies what so many of us are looking for.”

For Marcus Corbitt, who trains Mormon missionaries in Provo, the Republican Party made the mistake of taking Utahans for granted. Now the state is simply asserting its attachment to values that the party has betrayed.

“Utah voters put country above party, and values above party. A lot of that does have to do with the Mormon faith, but it just so happened that the Republicans represented Utah voters better than the Democrats. This year that’s not the case. So we’re seeing that people are steadily coming to Evan McMullin.”

Quite apart from his policies and his dubious attachment to conservative values, many Mormons have been repelled by Trump’s behaviour during the campaign. Bronson Gundersen finds his attitude to women “sickening”, while Corbitt recalls his proposal for a ban on Muslims entering the country as “a real red flag” for him.

Trump’s attacks on Muslims and immigrants hit a nerve with many in this community, whose memory of persecution informs a deeply held attachment to religious liberty.

“Obviously we’re very sensitive,” says Corbitt. “As a Mormon missionary, often, just walking on the street, people would yell things at me that were derogatory, that were obscene and vulgar. I would never treat people that way because of their religion. And I feel that’s what America is about.”