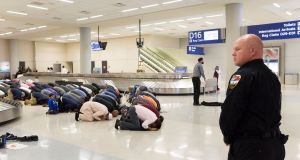 When Mari Khoury* waved goodbye to her husband Fadi in August last year she thought they would soon be reunited on US soil. She departed Istanbul, their home for several years, for the US, while Fadi returned to Syria.

Months previously, Fadi, from Damascus, had applied to become a US permanent resident through Mari, an American citizen who grew up in Ohio to Syrian parents.

For years the family imagined with hope and excitement their future in America: they researched jobs, homes (Fadi favoured a log cabin deep in the woods, a life unimaginable in the Middle East, and where he, a chef, could perfect his culinary skills) and considered the kind of freedom they had never previously experienced together.

Most of all, America offered quality schooling and a safe place to grow up for Suzanne, their three-year-old daughter.

In February this year, six months after his wife departed, Fadi was called to Amman, Jordan, for a standard medical and interview at the US embassy. He said his farewells to his parents in Damascus, ready to finally embark on the next chapter of his life with his wife and daughter.

But the dream became a nightmare: Fadi completed the medical and interview only to be told he wouldn’t be granted a visa. President Donald Trump’s “travel ban” on those entering the United States, which included five Muslim-majority countries, had come into force just a month after Fadi had made his application.

Though the family continued with their plans after that point, Mari never felt it would seriously affect her husband’s visa application: both she and her daughter were American citizens living in the US, a factor that normally significantly strengthens the case for issuing an immigration visa.

But in this case it appeared to make no difference. “We freaked out,” says Mari. “We had no idea what was happening. The law had changed really recently, and he was among the first group of people to be impacted by it, so we had no idea what to expect.

“The [US] consular officer [in Amman] said it could take two further weeks for a decision, and wanted more information about his family and his social media accounts. We tried researching online but there was no one who knew what was going on. Even my lawyer said she had no idea.”

'We decided that if we’re going to wait this out, we should do it together. Even if that meant leaving such as safe place as America'

Mari desperately contacted congressmen, senators, bishops, lawyers – even the White House – but none was able to help. Fadi, before he was forced to return to Syria from Jordan, applied for a “waiver” that consular officials said would see his case investigated more thoroughly by US immigration authorities. But the wait went on: two weeks became two months, and two months became six.

When the US supreme court upheld the travel ban in June this year – almost a year since Fadi had last seen his wife and child – Mari faced an impossible choice: stay safely in the US and risk her daughter forgetting that she had a father, or return with her girl to Syria, where war raged and Israel had been conducting bombing raids at the time.

With a return to Istanbul out of the question as Ankara stopped issuing visas for Syrians in 2016, Mari and Suzanne moved to Syria from the American midwest, where they had been living with Mari’s parents and brother. The family are now living in a small village outside Homs.

“We decided that if we’re going to wait this out, we should do it together,” Mari says. “Even if that meant leaving such as safe place as America, leaving my family to come here just to be with my husband.”

Since Fadi’s interview, the family say they have had almost no contact from consular officials. When they call or email the embassy asking for an update, they get a standard reply: that there is no new information, but that they’ll be contacted when something changes. Mari says neither the embassy nor US Citizenship and Immigration Services have asked for any specific information or details since.

The administration claims that because US immigration services cannot obtain detailed information about individuals applying for visas from their own governments, they are unable to adequately vet those applicants. Iraq, a US ally, saw visa restrictions initially placed against its citizens lifted in March 2017. But for citizens of certain countries – for example, Syria and Iran – the ban remains.

“[Our] position on the travel ban is that it is an unjust and ugly embodiment of the president’s clear, unabashed and unashamed anti-Islam and anti-immigrant animus,” says Esther Sung, staff attorney at the US-based National Immigration Law Center.

“But if the ban has to remain in effect while legal challenges against it continue in the courts, or until the administration changes, then the waiver process should be transparent and legitimate – neither of which it is now.”

Last year, companion Bills were introduced by members of the House of Representatives and the Senate in an attempt to rescind the travel ban. Companion Bills are similar or identical proposals from members of Congress that, in this case, requested the introduction of legislation to defund President Trump’s executive order.

“We hope that Congress will use this opportunity to show the president and the rest of the world that we are better than President Trump’s anti-immigrant fear-mongering,” says Sung.

Sima Alizadeh, an immigration attorney at the Pars Equality Center in San Jose, California, said that as of September 30th this year, 1,836 waiver applicants had been cleared, but said that doesn’t mean that all have yet been granted visas.

For Mari and her family, the wait goes on. “Other than the obvious, that the current situation in Syria isn’t too good, the US is my home, where I grew up. I have just the best childhood memories there,” she says.

“I just hope my daughter gets the opportunity to experience the same things. It gets me emotional thinking about it. We’re both US citizens. They’re forcing us to choose between my husband or living in America.”