Stories from Syria: One family’s defiant stand in al-Waer

‘Tommy’ Toumeh, 91, faced down armed fighters who told him to leave his home in 2014 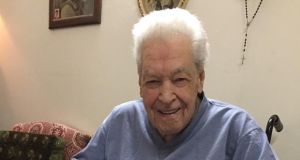 Toumeh ‘Tommy’ Toumeh (91): The Toumehs were the only Christian family to remain in al-Waer. Before the war there had been 300 Christian families and two churches in the Homs suburb. Photograph: Michael Jansen 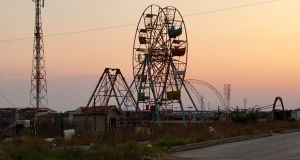 An abandoned amusement park on the outskirts of al-Waer, a suburb of Homs. Photograph: Michael Jansen 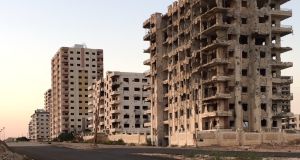 Buildings in al-Waer, Homs, damaged in the Syrian war, stand alongside others that have emerged unscathed to date. Photograph: Michael Jansen 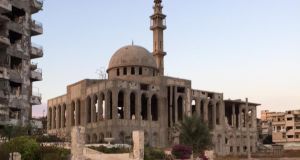 Every Syrian family in every city, town and village has its own war story. The story is a prized possession to share with outsiders, however harrowing: this is how we have survived.

The steadfast Toumeh family of al-Waer, a middle class dormitory suburb of Homs, greets us with tea and scones. The hero of the story is grandfather Toumeh (“Tommy”) Toumeh, a white-haired gentleman of 91. He sits in a wheelchair, his back bent by age, but his mind is clear and his memory excellent.

Shooing away the large family dog, Rambo, Toumeh, who speaks perfect British-accented English, and his granddaughter Lama tell the story of their three-year ordeal in al-Waer.

The family was at home in May 2014 when lightly armed fighters from the Free Syrian Army and the al-Qaeda-linked Jabhat al-Nusra entered the suburb after being evacuated from the Old City of Homs under a UN-brokered deal.

One day, while Lama was walking Rambo, a young man from a neighbouring family told her Christians were not welcome and had to leave. Although the man’s parents apologised, armed fighters subsequently came to the house, where the Toumehs had lived for 50 years, threatened them and gave them three days to depart.

The old man refused. “I will not leave. You can kill me if you like.” Lama, an English teacher, and her father, who trains journalists at the university, went to stay at a Christian village east of Homs. Toumeh stayed on with his wife and two daughters.

Muslim and Christian neighbours rallied round, guarded the Toumehs and brought food so they would not have to go out often. The Toumehs were the only Christian family to remain in al-Waer, although there were about 20 individual Christians who did not leave. Before the war there had been 300 Christian families and two churches in the suburb.

The Syrian army’s siege on al-Waer was partial. Civil servants went out to jobs and students to schools and universities. They brought home fresh fruit and vegetables and other supplies for family and friends. The Toumehs felt lucky when they received a single tomato.

Merchants brought in frozen meat, rice, lentils and flour; doctors brought medicines. Bread, baked at a huge mechanised plant at one entrance to al-Waer, was distributed throughout the quarter. But armed groups demanded a share of provisions or money from shopkeepers, reducing the amount of supplies available for civilians and making life expensive for the 22,000 people remaining in al-Waer.

The Toumeh family was divided until last April when, after several incomplete evacuations of fighters, the last group left. Toumeh’s wife, aged 84, died shortly after they departed.

I became a member of the Irish family. I did everything with them. Had my meals, went to church, and celebrated Christmas

Born in 1925 in Homs, Toumeh was educated by Jesuits. “My first foreign language was French, my second English.” He took up arms in the 1940s against Syria’s post-first World War French occupiers and welcomed independence in April 1946 when the last French soldier left the country.

“From 1945 until 1982 I worked for the Iraq Petroleum Company. I was employed on the pipeline carrying oil from Kirkuk in Iraq to the port of Tripoli in Lebanon.” He was posted at the pumping station known as “T3” near the ancient ruins of Palmyra.

“I went to Britain and Ireland in 1956 to receive training in engineering and security.” His course took him to centres near Nottingham and Belfast where he lived in family guesthouses. “The English family was very correct but never invited me for a cup of tea. I became a member of the Irish family. I did everything with them. Had my meals, went to church, and celebrated Christmas, tended the garden. In Belfast, there was a huge Christmas tree where they put out presents for poor children.”

He opens a well-worn album placed by Lama on a small table before him and begins to leaf through tattered pages containing black-and-white photos of him with his English hosts and of him standing beside the Robin Hood statue in Nottingham. He opens a page showing a huge Christmas tree in Belfast. “They put presents under the tree for poor children. We rented a car and drove to Dublin. I spent a week in London on holiday.”

Hanging on the wall in the sitting room are two of Toumeh’s oil paintings of two young girls in a countryside, copies of works of a minor 19th-century French master whose name he does not recall. He began painting in school and has continued throughout his long life.

He is optimistic about Syria’s future: at present “the glass is half full”.

Today al-Waer has 45,000 residents, more than double the number who remained during the siege; before the war the suburb had a population of 150,000. Frontline apartment blocks were badly damaged by shelling and heavy machine-gun fire, but looted rows of buildings behind them can be repaired and families can return.

During Syria’s pre-war prosperous years the old town of al-Waer, with its family homes and small shops, was surrounded by blocks of flats for newcomers seeking work in Homs’s growing manufacturing and tourism sectors. Unfortunately, pollution from the nearby oil refinery has inflicted on al-Waer and Homs itself Syria’s highest incidence of cancer. War is not the only threat to life and limb.