Trump – one year on: The US had not changed enough – or, for some, had changed too much – under Obama 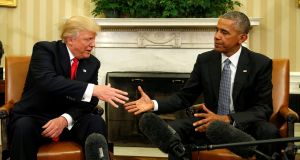 The email arrived the afternoon after Donald Trump was elected president of the United States. “Life is never a straight arrow!” its sender wrote in the subject line. The body of the email was blank, save for his name and title. He was an Irishman with a senior role in the Trump organisation. We had become friends much earlier in my four-year stint as Washington correspondent for The Irish Times, and we exchanged emails from time and time. As Trump’s political star kept rising he graciously helped get me into the candidate’s campaign events. He was my man on the inside.

The subject line of his email was accurate. Sometimes history zigzags, as Barack Obama’s aide Ben Rhodes also wrote, in an email to the outgoing president just after the election.

Certainly few predicted Trump’s election, although, seeing Hillary Clinton’s unpopularity in Pennsylvania, Florida, North Carolina and Ohio in the run-in to the election, a year ago, I knew Obama’s coalition had well and truly fractured. She was in trouble.

After eight years of No Drama Obama came Tempestuous Trump. After two terms of a White House free from scandal, Washington now has a soap opera

Many opponents of Trump and the Republican Party have been unpicking the election result ever since, trying to understand his stunning victory, like surgeons dissecting a cadaver in search of a mysterious lethal ailment. It has been, and will be, a long autopsy.

What Happened, Clinton’s angry memoir, was clouded by her rush to blame, for the most part, others: the Russians, WikiLeaks, the former FBI director James Comey et al. A more useful postmortem may be to consider last year’s election as another swing of the pendulum from left to right, although the change was a little wilder this time, from the analytical Obama to the erratic Trump, from the meticulous, policy-driven governance of the 44th US president to the ratings-driven pronouncements of the 45th.

In the pendulum-swinging sequence of change in US presidential politics Trump’s  victory makes more sense: he is the polar opposite of what came before him

After eight years of No Drama Obama came Tempestuous Trump. After two terms of a White House that was free from scandal, Washington, DC, has a soap opera with a lead character intent on controlling the TV ratings by, it seems, whatever means necessary. He judges successful leadership not in legislative achievements but in his dominance of the 24-hour news cycle.

In that pendulum-swinging sequence of change in US presidential politics Trump’s election victory makes more sense: he is the polar opposite of what came before him. In presidential elections where the incumbent is not standing again, voters value in a candidate the qualities seen as lacking in the outgoing chief. In Trump’s case his advantage as an outsider was magnified in a climate where both parties were perceived to have failed the people and the Washington establishment was so despised.

Stumped by Trump’s appeal early in the election campaign, Obama’s former chief strategist David Axelrod carried out a useful exercise: he traced past swings in presidential elections, from the grandfatherly Dwight D Eisenhower to the youthful, energetic John F Kennedy, from the larger-than-life Ronald Reagan to the charisma-free George HW Bush, right up to the most recent election.

In an article in the New York Times in January 2016 Axelrod sketched the stark contrasts between Obama and Trump that presented the latter as an attractive alternative to a frustrated electorate with an overwhelming desire for change. Obama’s “call for tolerance and passionate embrace of America’s growing diversity inflame many in the Republican base, who view with suspicion and anger the rapidly changing demographics of America”, he wrote. “The president’s emphasis on diplomacy is viewed as appeasement. So who among the Republicans is more the antithesis of Mr Obama than the trash-talking, authoritarian, give-no-quarter Mr Trump?”

The billionaire celebrity sold himself as the agent of change, just as Obama had done in 2008

Trump was “the perfect counterpoint” to Obama, he wrote. To understand the property tycoon’s appeal to some of his voters, Axelrod could have added that Trump was white.

Yet when the people came to cast their ballots Obama’s approval rating hit a near-record high of 56 per cent, just a point shy of his score shortly before his re-election, in 2012. In hindsight Axelrod was wrong. It was Obama’s United States, not Obama himself, that drove the anger that elected Trump. The billionaire celebrity sold himself as the agent of change, just as Obama had done in 2008. But the country had not changed enough – or, for some, had changed too much – under Obama.

Many of the voters who bought into Obama’s hope-and-change agenda would later shop at Trump’s counter. The number of counties that voted for Obama twice and then flipped to Trump last year was enough to turn key blue states red and seal the businessman’s victory. The economic recovery that Obama boasted about was not felt widely enough. The promise of change these voters once liked in Obama fell short, and they took a punt on the other guy, who was offering a far less complicated promise: to make America great again. Many middle-ground voters appeared to have taken seriously Trump’s question “What have you got to lose?”

The country that Obama bequeathed to Trump now seems like a distant land. The rapidly changing social norms and ethnic diversity Obama championed as a progressive force for good are seen as unsettling disruptions to Trump and his supporters, who align them with the country’s long-term economic decline and uncertain future. If the spate of racially profiled killings during the Obama years did not puncture the myth that his election marked a postracial United States, Trump’s inflaming of racial tensions undoubtedly did.

A pendulum? This last swing in US politics feels far more like a wrecking ball, just as Trump would have wanted.