States of emergency declared across US east coast 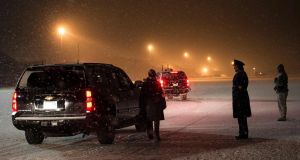 Washington DC and Baltimore were under blizzard warnings on Thursday and states of emergency were declared across the east coast of the US as preparations were made for a storm that is expected to bring up to 75cm of snow.

As the first major east coast winter storm began dumping snow on the nation’s capital, residents from North Carolina to New York were told to stay indoors, avoid travel and stock up on food and other necessities.

“Anyone who has the illusion you’re going to be taking big trips over the weekend, get that out of your mind,” de Blasio said at a news conference.

Speaking at a news conference surrounded by dump trucks being loaded with salt, Bowser said the US capital’s public schools would be shut on Friday and local government offices would close at noon.

It forecast up to 61cm of snow in Washington, and as much as 75cm in western suburbs, with winds gusting up to 80 km/h.

“Visibility will be reduced to near zero in whiteout conditions,” it said.

The storm was expected to deliver a slightly weaker wallop to the New York and Long Island areas, with blizzard conditions forecast from Saturday morning through Sunday.

New York cancelled its Winter Jam in Central Park, set for Saturday, even after the city had spent days making artificial snow for the winter sports festival.

Governors in Virginia, Maryland, North Carolina and Pennsylvania joined Bowser in declaring states of emergency, and the governor of West Virginia declared a state of preparedness.