Some nations hit by US travel ban may stay on list, official says 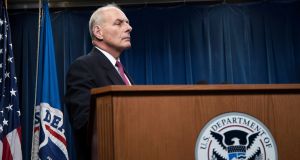 US secretary of homeland security John Kelly during a press conference on remarks on the Trump administration travel ban. Photograph: Shawn Thew/EPA

US homeland security secretary John Kelly said some of the seven Muslim-majority countries affected by president Donald Trump’s executive action on immigration will not likely be taken off the list any time soon.

Mr Kelly said people from the seven targeted nations who hold dual citizenship will be allowed to enter the United States on the passport of a non-restricted nation.

The new homeland security secretary faced questioning about the executive order Mr Trump signed on Friday that halted travel to the United States by people with passports from Iran, Iraq, Libya, Somalia, Sudan, Syria and Yemen for 90 days, and stopped the resettlement of refugees for 120 days.

Meanwhile the US embassy in Dublin has said Mr Trump’s executive order on immigration does not restrict the travel of dual citizens as along as they hold the passport of an unrestricted country and possess a valid visa.

This applies “even if they hold dual nationality from one of the seven restricted countries,” it said in a statement on Tuesday evening.

The Irish Government is to undertake a “complete review” of US pre-clearance immigration facilities at Dublin and Shannon airports in the wake of the ban.

US immigration officers are based at both airports, allowing passengers to avoid immigration and customs when they arrive in the US.

There was widespread confusion at airports around the world as customs officials and airlines struggled to interpret the new rules.

Several lawsuits have been filed blocking portions of the order, which drew harsh criticism from Democrats, human rights organisations and some Western US allies.

Since the order, 721 travellers trying to enter from the seven countries were denied entry, according to Kevin McAleenan, acting commissioner of Customs and Border Protection.

Speaking in the Dáil on Tuesday, Mr Kenny said he would raise Mr Trump’s travel ban when they meet in March. He said he would not write to the president in advance, “because I intend to visit him in the Oval Office and say my piece publicly, both before and then’’ .

“I think president Trump is well used to disagreements and, obviously, is going to have many more in the times ahead,” Mr Kenny said.

He told the Dáil he had already said publicly it was not correct to ban travel on the basis of country, nationality or creed. He said the issue was not just about visits to the US president, adding there was a long established tradition in the links between the two countries.