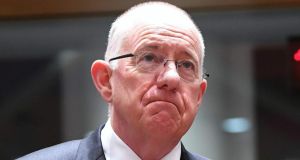 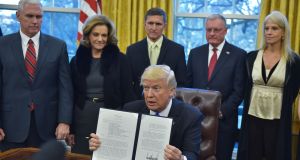 US president Donald Trump holds an executive order in the Oval Office of the White House last week. National security adviser Mike Flynn is standing directly behind the president.

In the first direct interaction between the Irish Government and the Trump administration, Mr Flanagan will meet Mr Flynn, a senior figure in Mr Trump’s inner circle, for a meeting today.

The Department of Foreign Affairs and Trade said that Mr Flanagan planned “to convey the Government’s concern” about Mr Trump’s recent immigration orders on planned deportations that affect the undocumented Irish in the US and last week’s controversial travel ban that more widely affected citizens of certain designated states.

The Minister also plans to discuss the Northern Ireland peace process, Ireland’s approach to Brexit, the prospects of immigration reform, and the economic links between Ireland and the US.

Mr Flanagan, on his first visit to the Washington since Mr Trump took office on January 20th, is scheduled to meet the Republican Speaker of the House of Representatives Paul Ryan, the party’s top congressional elected official, and House majority leader Kevin McCarthy, the second-ranking House Republican, on Wednesday.

Both Mr Ryan and Mr McCarthy will play pivotal roles in driving Mr Trump’s legislative plans on Capitol Hill. Later on Wednesday, Mr Flanagan will attend a dinner hosted by Irish ambassador Anne Anderson attended by the members of the US congress connected with the Friends of Ireland caucus.

Among those scheduled to attend the dinner are South Carolina Republican congressman Mick Mulvaney, one of Mr Trump’s cabinet nominees whom he wants to run the powerful Office of Management and Budget.

Congressmen Pete King and Richie Neal, the respective Republican and Democratic co-chairs of the Irish-American group, will also be in attendance.

Mr King has denied that he played a role in crafting Mr Trump’s executive order banning the entry of refugees and legal immigrants from seven predominantly Muslim countries.

He was responding to remarks made by former New York City mayor Rudy Giuliani, a close associate of Mr Trump’s, on Saturday night that he, Mr King and others helped to draft the immigration order.

Mr King said that Mr Giuliani had confused two meetings. The New York Republican congressman pointed out that he was among a group of about 15 people who met Mr Trump in August to discuss measures to tackle terrorism but that a ban on people from certain countries or against Muslims was not discussed then.

He said that there was a discussion about the executive order at another meeting in October but that he did not attend that meeting. Mr King said that he “fully supports” the order but wasn’t aware of it before it was signed.