Silicon Valley under scrutiny as US attitudes to tech giants shift

US Letter: Legislators are among those questioning dominance of tech companies 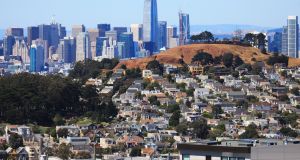 The San Francisco Bay area is suffering from an acute housing crisis, in part a side effect of the booming tech industry. Photograph: Jim Wilson/New York Times

Silicon Valley comes into view. Nestled behind the Santa Cruz Mountains that separate the peninsula from the Pacific ocean, the towns of Palo Alto, Mountain View and Santa Clara merge into each other.

Once ordinary residential suburbs of San Francisco, in recent decades these neighbourhoods became the centre of the global technology industry. Thanks mainly to the innovation culture of nearby Stanford University, the region developed as an electronics hub in the 1970s and 1980s as companies such as Hewlett-Packard and Intel expanded. As the 21st century approached, tech giants such as Facebook, Google and Apple sprang up. Today their giant campuses, including Apple’s new “spaceship” headquarters, dwarf the more modest homes in the area.

The rapid development of the tech sector helped put Silicon Valley on the map – and contributed to tens of thousands of high-paying jobs in Ireland, as Taoiseach Leo Varadkar’s visit there this week underlined.

But there is another side to this success.

Today, locals complain of being priced out of the housing market. The greater San Francisco Bay area is suffering from an acute housing crisis with the price of a home twice the national average. While much of this is down to a lack of housing supply and failure to build, it is also a side effect of the booming tech industry, where workers can command ever-higher salaries as the region’s big companies compete for them.

The United States is also questioning the dominance of its once-beloved tech companies in other ways.

This week, senior executives of Facebook, Google and Twitter were summoned before two Senate committees to answer questions about Russian interference in last year’s US presidential election. Concern about the role played by social media platforms in the election have been brewing ever since US intelligence services announced in January that Russia had interfered in the electoral process. At first, Facebook dismissed any involvement, with chief executive Mark Zuckerberg calling it a “pretty crazy idea” and saying voters “make decisions based on their lived experience”.

He later said he regretted that statement after the company confirmed that a Russian-based company had bought $100,000 in ads designed to promote divisive material. This week in Congress, Facebook told legislators that the reach of Russian influence had been greater than expected, with 150 million users of Facebook and Instagram exposed to Russian-backed material.

During the hearing, examples of ads pushed by Kremlin-backed agencies were released showing how those ads looked to Facebook viewers – startling evidence of how Russian groups tried to exploit pressure points among the US electorate such as gun crime, religion and race.

Facebook has promised to mend its ways, pledging to hire an additional 20,000 staff to deal with sensitive security issues. On Wednesday the company warned investors that its profitability could be hit by new investments in security but Zuckerberg said the goal of “protecting our community is more important than maximising profits”.

The company is probably not too worried, however.

A few hours after the committee appearance, Facebook reported a 79 per cent jump in quarterly profit for its third quarter, with advertising revenue hitting $10.14 billion in that period.

Growing concern about the power of tech giants such as Facebook is not limited to manipulation of voter habits through fake news. Over recent years there have been fears that the global tech companies are becoming too big, too quickly and should be broken up and regulated like public utilities. Google, for example, controls more than 90 per cent of the web-search market in many countries, while Amazon dominates the ecommerce industry and is moving further into the retail market through its acquisition of upmarket food chain Whole Foods this year.

In terms of regulation, the US has traditionally been reluctant to rein in its indigenous tech giants which tend to be seen as good for consumer choice. Europe, in contrast, has been taking a tougher approach, with the EU slapping down strict anti-trust fines on US tech giants, both in terms of their tax practices and through perceived abuse of market position such as Google’s promotion of its own price-comparison services above those of its competitors.

Politically, a growing resistance towards the dominance of tech companies is coming from both right and left of the political spectrum, with even Democrats, who traditionally have a cosy relationship with Silicon Valley and receive significant funding from west-coast companies, calling for further regulation.

In the not-too-distant past Zuckerberg was being touted as a possible Democratic presidential candidate in 2020. With the tide turning against Facebook and other giant technology companies, that possibility seems to be less likely.