In 2015 American woman Sandra Bland was arrested in Texas. Three days later she died in police custody, new footage of the arrest, shot by Bland herself, has prompted calls for a new investigation. Video: Reuters/Investigative Network 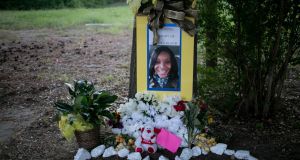 As trooper Brian Encinia angrily threatened her with a stun gun from just outside her car window, Sandra Bland recorded the encounter on her cellphone, shown in a newly released, 39-second video that has prompted Ms Bland’s family to call for a renewed investigation into her arrest and death nearly four years ago.

Ms Bland, a 28-year-old African-American from the Chicago area, was taken into custody in southeast Texas following the 2015 traffic stop and was found dead in a jail cell three days later in what was officially ruled a suicide. The case, which drew international attention, intensified outrage over the treatment of black people by white police officers and was considered a turning point in the Black Lives Matter movement.

The video surfaced for the first time publicly Monday night in an investigative report on the Dallas television station WFAA that included interviews with Ms Bland’s family and supporters, who accused officials of concealing information that they say should have been made public early in the investigation.

Authorities released the trooper’s dashcam video days after Ms Bland’s death but the fact that Ms Bland recorded the encounter from the front seat of her car was not public knowledge. Cannon Lambert, a lawyer who represents the Bland family, said the video, by showing Ms Bland with a cellphone in her hand, seriously undercut the trooper’s claim that he feared for his safety as he approached the woman’s vehicle.

Mr Encinia said during internal interviews with department of public safety officials that he had been worried about his safety. “My safety was in jeopardy at more than one time,” he told department interviewers. Mr Encinia was indicted on a charge of perjury – the only criminal charge arising from the case – after grand jurors accused him of making a false statement in his claim that he removed Ms Bland from her car to more safely conduct a traffic investigation. But the charge was later dismissed on a motion by prosecutors in exchange for the trooper’s promise that he would never again work in law enforcement.

The prosecuting team concluded that Mr Encinia’s permanent ban from law enforcement was the best option because there was no certainty of obtaining a conviction on the perjury charge, one of the prosecutors said at the time. Ms Bland’s death in a largely rural part of southeast Texas unified African-American leaders throughout the state, leading to the enactment of the Sandra Bland Act in 2017, which requires training in de-escalation techniques for all police officers, sets up protections in custody for people with mental health and substance abuse issues, and requires that independent law enforcement agencies investigate jail deaths.

The new video recycled the tense roadside confrontation that millions of online viewers had already seen from the officer’s dashcam video and another one shot by a bystander. The main difference was the perspective – in the video newly made public, Ms Bland is directly facing Mr Encinia.

“Get out of the car,” the officer shouts as he thrusts a Taser toward her. “I will light you up. Get out. Now.” Ms Bland was pulled over near the campus of Prairie View A&M University in Waller County, where she had been planning to begin a new job, after the trooper said she failed to signal a turn. But the traffic stop became heated and Mr Encinia ordered Ms Bland out of the car.

The video was released by WFAA in partnership with the non-profit Investigative Network. Its chief reporter, Brian Collister, said the video had been in the hands of law investigators until it was obtained by his news organisation. Members of Ms Bland’s family called on Texas officials to re-examine the case after Collister showed them the video, according to the WFAA report.

“Open up the case, period,” Ms Bland’s sister, Shante Needham, told the station. “We know they have an extremely, extremely good cover-up system.”

Mr Lambert, the family’s lawyer, told The Times that the release of the video raised questions about prosecutors’ decision not to press ahead with the perjury case, saying the recording undercut Mr Encinia’s claim that he feared for his safety. “So if the video showed that he had no basis of being in fear of his safety, and he lied about that, then you would think they would be using that video,” he said, calling prosecutors’ decision not pursue the case “extremely troubling”. – New York Times