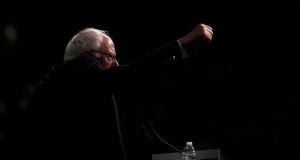 Democratic US presidential nomination candidate Bernie Sanders: “The people’s revolution that we’re talking about . . . is strong in every part of the country.”Photograph: Carlo Allegri

The latest multistate qualifying heats in the US presidential race showed again the Republican establishment can do little to halt front-runner Donald Trump’s populist surge and that Bernie Sanders’s challenge to Democratic favourite Hillary Clinton is far from done.

The Vermont senator scored a stunning upset in Michigan, beating Clinton by 50 per cent to 48 per cent in a more ethnically diverse northern state. Several polls had predicted a Clinton win by more than 20 points.

His victory will not erode her lead of about 200 nominee- picking delegates, but it shows he can stage a stronger-than-expected fight in the big upcoming Rust Belt states of Ohio, Illinois and Pennsylvania.

Trump, the billionaire thorn in the Republican elite’s side, scored his 13th, 14th and 15th state wins in Mississippi, Michigan and Hawaii, showing his rage-against-the-machine candidacy has no geographic boundaries among angry Republican voters.

The property developer’s self-aggrandising campaign also showed again that it is not bound by political convention.

He avoided any real discussion of policy at his victory party in Florida and instead used the event – part-rally, part-press conference – mostly to promote his property and business interests and his own-name products.

It appeared as much an attempt to stick it to Mitt Romney, the 2012 nominee who last week rubbished Trump’s business record and presidential campaign.

“Advertising is less important than competence,” he said, pointing to his latest state victories on Tuesday night, while promoting samples of “Trump Steaks”, “Trump Wine” and “Trump Water.”

His merchandise sat next to him on stage at his Trump National Golf Club in Jupiter, the aptly named Florida town that captured another other- worldly experience in this mould-shattering campaign.

Mr Trump bragged to reporters that he was the only person who did well on Tuesday, speaking before Ted Cruz won the Idaho primary, giving the Texas senator his seventh state victory.

Cruz is the runaway contender to be the last-man-standing anti-Trump challenger, but not until Rubio and Ohio governor John Kasich see if they can save their White House campaigns in their winner-take-all-delegates home-state primaries on Tuesday.

Rubio’s one-time status as the establishment saviour crumbled a little more after another disastrous night.

The first-term senator came a distant third or fourth in Tuesday’s four nominating contests, leaving him with no delegates based on a proportionate distribution around votes.

Shortly after Trump massaged his galactic ego in front of country-club Republicans at his ritzy golf resort, Sanders, the 74-year-old democratic socialist, held an impromptu press conference in what looked like someone’s backyard down the road in Miami.

Campaign posters were hastily stuck on a fence behind him, reflecting how his win in Michigan even took his own campaign by surprise.

He thanked voters for repudiating the pundits who had written him off in the state, the night’s biggest contest with 130 delegates at stake.

“What tonight means is that the Bernie Sanders campaign, the people’s revolution that we’re talking about . . . is strong in every part of the country,” he said. “And frankly, we believe our strongest areas are yet to happen.”

Michigan showed Sanders could perform better than expected among African-Americans in a northern state than in the south.

Exit polls showed he lost black voters by 40 points in Michigan, half his loss to Clinton among black voters – her “firewall” – in Mississippi on Tuesday.

Exit polls showed he won majorities among a large swathe of Michigan voters who were worried about the economy and about trade deals shipping jobs overseas. Michigan is a largely white, liberal, working-class state that has been badly hurt by manufacturing job losses.

Despite Sanders’s victory in Michigan, Clinton’s landslide win in Mississippi, replicating her other victories in the south, gave her a bigger delegate haul on the night and puts in the driving seat to take the Democratic nomination – though not as quickly as she would like.

Painting a bright gloss on Tuesday’s votes, Clinton campaign manager Robby Mook told reporters on Wednesday that her campaign was “nearing the point where our delegate lead will nearly become insurmountable”.

Sanders needs many more surprises – and bigger victories than Michigan – if he is to cause an even bigger upset.