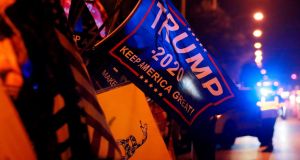 Multiple Rupert Murdoch-owned conservative media outlets in the United States have shifted their messaging in a seeming effort to warn readers and viewers that Donald Trump may well have lost the presidential election.

The new messaging appears to be closely coordinated, and it includes an appeal to Mr Trump to preserve his “legacy” by showing grace in defeat. The message is being carried on Fox News and in the Wall Street Journal and the New York Post – all outlets avidly consumed by Mr Trump himself, especially Fox.

One Fox News host, Laura Ingraham, an intimate of the president ever since she spoke at the 2016 Republican national convention, made an astounding statement that seemed directed at Mr Trump personally, advising him to accept defeat “if and when that does happen” with “grace and composure” and appealing to his sense of his own legacy.

Ingraham said in part: “If and when it’s time to accept an unfavourable outcome in this election, and we hope it never comes, but if and when that does happen, president Trump needs to do it with the same grace and composure he demonstrated at that town hall with Savannah Guthrie. So many people remarked about his tone and presence. Exactly what he needs.

“Now losing, especially when you believe the process wasn’t fair, it’s a gut punch. And I’m not conceding anything tonight, by the way. But losing, if that’s what happens – it’s awful. But president Trump’s legacy will only become more significant if he focuses on moving the country forward.”

The Wall Street Journal has published an opinion piece with almost the exact same message. It is titled “ The Presidential Endgame ” and subtitled “Trump has the right to fight in court, but he needs evidence to prove voter fraud”.

“Mr Trump’s legacy will be diminished greatly if his final act is a bitter refusal to accept a legitimate defeat,” the piece warns.

Here is how the article opened: “Perhaps it was inevitable that Donald Trump’s re-election campaign would end as his presidency began: with the president claiming victory and his frenzied antagonists denouncing him as a would-be fascist. The reality is that the US can and probably will have a normal election outcome regardless of the shouting between now and then.

“Mr Biden is leading in enough states to win the presidency, and if those votes survive recounts and legal challenges, he will be the next president.”

Top editors at the New York Post – which before the election was the launch vehicle for wild and desperate attacks on Joe Biden’s son Hunter – have “told some staff members this week to be tougher in their coverage” of Mr Trump, the New York Times reported , citing two anonymous employees of the paper.

The Times piece said: “On Thursday, in a sudden about-face, Rupert Murdoch’s scrappy tabloid published two articles with a wildly different tone. One accused the president of making an ‘unfounded claim that political foes were trying to steal the election’. The headline on the other described Donald Trump Jr as the ‘panic-stricken’ author of a ‘clueless tweet’.”

News coverage at Fox News has similarly shown little patience with the lies about voter fraud Mr Trump is advancing in hopes of reversing the election.

Asked about the Trump campaign’s assertion that Republican observers had not been allowed to observe vote-counting, the Fox correspondent states flatly: “That’s not true. It’s not true. It’s just not true.” –Guardian News and Media