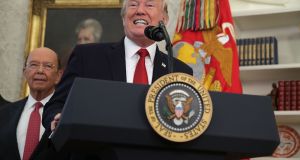 President Donald Trump “has a need for immediate gratification”, according to Wolff. Photograph: Alex Wong/Getty Images

US commerce secretary Wilbur Ross, a former director of Bank of Ireland, was ridiculed in the Trump White House for “never missing an Air Force One opportunity”, according to author Michael Wolff’s book.

The explosive book about Trump’s first year in office pokes fun at the billionaire New York investor, who made hundreds of millions of euro from his investment in Ireland’s biggest bank during the economic recovery.

The release of Fire and Fury: Inside the Trump White House was brought forward by four days after lawyers for Mr Trump attempted to block publication of the book.

Mr Wolff, a media critic and columnist, quotes Steve Bannon, former chief strategist to Mr Trump and one of his key sources of information, mocking Mr Ross for his eagerness to be close to the president during a presidential trip to the Middle East in May 2017.

“Ross was widely ridiculed for never missing an Air Force One opportunity – as Bannon put it, ‘Wilbur is Zelig, every time you turn around he’s in the picture’,” wrote Wolff of his appearance on the presidential plane.

Mr Bannon’s reference is to the fictional character Leonard Zelig – created by Woody Allen for his 1983 movie Zelig – who turns up on the fringes of historical events in mock-up vintage newsreel clips from the 1920s and 1930s.

Mr Wolff’s book has caused a sensation with its damaging revelations about a chaotic White House and dealings of the president’s inner circle, prompting Mr Trump to make legal threats against the author and his publisher.

Details of Mr Trump’s life inside the White House, including his bedtime TV-watching and cheese-burger-eating habits, and what his closest aides think about him, have generated a blizzard of interest.

The White House has strongly denied claims made by Mr Wolff, while President Trump has called the book “phony” and “full of lies, misrepresentations and sources that don’t exist”.

The author devotes significant tracts of the book to Mr Bannon’s thinking on the successful strategy behind Mr Trump’s election campaign, his administration and members of the president’s family and White House team.

The author delves into the Irish Catholic backgrounds of Mr Bannon and Paul Ryan, the Speaker of the House of Representatives, to describe the former’s disdain for the Republican politician.

Mr Bannon’s political heroes were former Democratic house speakers John McCormack and Tip O’Neill, writes Mr Wolff, but he was contemptuous of the political ideology of Mr Ryan, an Irish-American from Wisconsin.

“An Irish Catholic working-class man was philosophically separate from aristocrats and gentry – and without aspirations to be either,” writes Mr Wolff.

“Bannon venerated old-fashioned pols. He looked like one himself: liver spots, jowls, edema. And he hated modern politicians; they lacked, in addition to political talents, authenticity and soul.

“Ryan was an Irish Catholic altar boy who had stayed an altar boy. He had not grown up to be a thug, cop or priest – or a true politician.”

The book summarises the Trump administration’s foreign policy as being rooted in doing the opposite of what his predecessors Barack Obama and George W Bush would do and dividing the world along Cold War lines.

The US administration’s latest foreign policy, “an effective Trump doctrine” – was to reduce the world into three elements: “powers we can work with, powers we cannot work with, and those without enough power whom we can functionally disregard or sacrifice,” writes Wolff. “It was Cold War stuff.”

In his first interview since publication of the book, Mr Wolff stood by the claims and said that the president’s threat of legal action was only boosting sales of the book and confirming the portrait he painted of Mr Trump.

Clarifying the book’s claim that Mr Trump’s entire circle questioned his fitness for office, Mr Wolff told NBC’s Today programme that his aides “all say he is like a child. And what they mean by that is he has a need for immediate gratification. It’s all about him.”