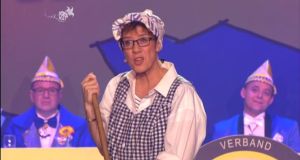 Annegret Kramp-Karrenbauer as Gretel in 2017. During that turn, Gretel told her cheering audience about Donald Trump: “If they’d asked us ... they’d not have elected that twit.” Photograph: YouTube

Every political party has something it will never live down. Twink’s 1991 ardfheis turn was more morto than panto for Fine Gael.

On Sunday its German sister party, the Christian Democratic Union (CDU), faces its own Twink moment: Angela Merkel’s successor as party leader, Annegret Kramp-Karrenbauer, has promised to revive her annual turn as Gretel the cleaning lady at a local “Karneval” party.

Karneval is a pre-Lenten fancy dress party tradition that divides Germany into love and loathe camps.

Tiny, southwest Saarland is in the love camp, particularly when Gretel arrives on stage, wearing an apron and cloth cap, for some straight talking. In her 2017 turn, Gretel told her cheering audience about Donald Trump: “If they’d asked us . . . they’d not have elected that twit.”

Merkel’s decision to keep open German borders has made her a humanitarian heroine for some and, for others, a hate figure

Sunday is Annegret Kramp-Karrenbauer’s first outing as Gretel since she was elected CDU leader in December.

But this week she demonstrated she shares her alter-ego’s sweeping and vacuuming skills, cleaning up after her CDU predecessor at a think-in about the 2015-2016 refugee crisis.

That brought more than one million people into Germany and, some argue, expedited Angela Merkel’s political end.

After two days of therapy, the party issued a series of European demands: a migration early-warning system, common EU asylum standards and reform of Frontex into a real EU border police.

It’s clear the new CDU leader is reaching out to her hardline Bavarian allies and her own party voters who drifted off during the migration crisis to the far-right Alternative für Deutschland (AfD).

But many in the CDU fear they will never live down 2015 until they pluck up courage to do something about the woman behind the policy.

Merkel’s decision to keep open German borders has made her a humanitarian heroine for some and, for others, a hate figure. Given her polarising potential, the chancellor – no longer CDU leader – stayed away from her party’s migration workshops.

But that has only amplified the she-who-must-not-be-named element, turning the former party leader into a female version of Harry Potter’s arch-nemesis, Voldemort.

The Bild tabloid asked this week: “What is Merkel good for now?”

She has warned her party against driving ahead while staring in the migration rear-view mirror.

After years of half-hearted tinkering, the SPD has now decided to go for broke

But her CDU successor, until December a state leader on the migration crisis front lines, sees a greater political risk lies in brushing things under the carpet.

But what can she deliver? The CDU’s European migration proposals, none of which were new, came with no ideas to overcome the political disagreement in Brussels.

Yet for Annegret Kramp-Karrenbauer, the fate of the SPD offers a cautionary tale.

But the SPD has been in crisis ever since because its core centre-left voters viewed the reforms as a betrayal of everything Germany’s oldest political party stood for: workers’ dignity and the welfare state.

After years of half-hearted tinkering, the SPD has now decided to go for broke.

Taking a sharp left turn, it has presented proposals of its own for a more liberal dole regime, particularly for older workers, as well as guaranteed minimum pensions and an end to humiliating welfare sanctions.

Given that Berlin’s coalition partners will block each others’ respective migration and welfare proposals, whispers suggest this coalition won’t serve its full term until 2021.

Poor SPD results in the European or autumn state elections could see it pull the plug sooner rather than later – despite its puny 17 per cent in polls.

Given what’s going on in the world, from Brexit to Trump, German politicians’ capacity for navel gazing is remarkable.