One shot and seven held after clashes in Missouri town 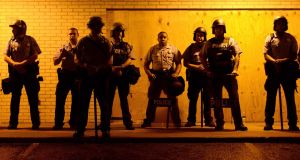 One person was shot and critically wounded and seven arrested early on Sunday as police in Ferguson, Missouri, clashed with protesters when a curfew was imposed following days of unrest over a black teenager being shot dead by a white police officer.

Scores of demonstrators had remained in the streets after the curfew took effect at midnight (0500 GMT). Law enforcement officials used loudspeakers to warn protesters to disperse immediately. Officers, equipped with gas masks and full-length shields, stood among and on top of armoured vehicles.

Governor Jay Nixon declared a state of emergency and announced the five-hour curfew after a week of racially charged protests and looting over the shooting of 18-year-old Michael Brown by Ferguson police officer Darren Wilson (28), in the suburban St. Louis community in the Midwest US state on August 9th.

Asked on CNN’s programme State of the Union on Sunday how long the curfew in the St Louis suburb would continue, he said the duration would be “judged by the community”.

Missouri State Highway Patrol Captain Ron Johnson said the person shot at a restaurant was in critical condition. Police were unable to identify the victim, who he said was not shot by police, and that the alleged shooter was still at large.

Seven people were also arrested for failing to disperse after the curfew took effect.

Mr Johnson said canisters of smoke and later teargas were fired as part of police attempts to reach the victim of the restaurant shooting, “and not in relation to the curfew”. The shooting victim was taken to hospital by bystanders before police could reach him.

Mr Johnson also said someone had shot at a passing police car but was not apprehended.

“I was disappointed in the actions of tonight,” he said. “The crowds we’ve had for the last two nights (were) citizens obeying, protesting.”

The smoke and teargas canisters largely dispersed the crowd, some of whom had been chanting “No justice, no curfew, no peace”, while others implored the crowd not to move forward towards police.

On Saturday evening the mood among the protesters on a main road in Ferguson had been tense and defiant following days of demonstrations and some looting.

“I think the cops are going to get violent tonight, but they can’t lock us all up.”

Tensions had been running high over the past week but escalated on Friday, pitting mostly black protesters against mostly white police as the demonstrators overran a residential and retail district that has become a centre of the unrest.

Mr Brown’s family and supporters have demanded that the officer who shot him be held accountable. The US Department of Justice is investigating the shooting for any civil rights violations, and the St. Louis County Police department has also launched a probe.

The police version of how Mr Brown was shot differs from witness accounts, including that of the friend who was walking with Mr Brown at the time, Dorian Johnson (22).

Police say that after Mr Wilson asked Mr Brown to move out of the road onto a footpath, Mr Brown reached into the patrol car and struggled with Mr Wilson for the officer’s service gun. Mr Wilson, who sustained a facial injury, then shot Mr Brown a number of times.

Mr Johnson and at least one other witness have said the officer reached out through his car window to grab at Mr Brown and the teenager was trying to get away from the officer when he was shot. Mr Brown held up his hands in a sign of surrender but the officer got out of his patrol car and shot Mr Brown several times, they said.

FBI agents were at the scene of Mr Brown’s shooting on Saturday interviewing residents. Civil rights activist Jesse Jackson also visited the site, leading a prayer near a makeshift memorial to Mr Brown just a few feet from where he died.

The Reverend Al Sharpton has said he would lead a rally with Mr Brown’s family in Ferguson today.