Obama says US senators ‘failed’ the people on gun control 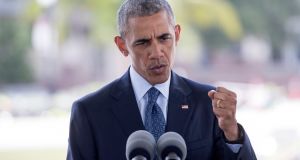 The White House accused US senators of a “shameful display of cowardice” on Tuesday and said they failed the American people by not advancing any gun control measures after the nation’s largest mass shooting in Orlando last week.

“Gun violence requires more than moments of silence,” US president Barack Obama said on Twitter. “It requires action. In failing that test, the Senate failed the American people.”

“What we saw last night on the floor of the United States Senate was a shameful display of cowardice,” Mr Earnest said on MSNBC.

After Monday’s votes, the Senate turned away from gun control, at least temporarily, to debate a different tactic for battling domestic attacks inspired by Islamic State and other foreign militant groups.

“This week we’ll have the opportunity to strengthen our ability to combat lone-wolf terrorists and connect the dots so we are better able to prevent terrorist attacks in the United States”, such as the Orlando massacre, Senate majority leader Mitch McConnell said.

Omar Mateen, the Orlando gunman, pledged allegiance to Islamic State during the June 12th rampage, in which he killed 49 people and wounded 53 at a gay nightclub, before being killed by police.

Republican Senator Susan Collins was trying to keep gun control attempts alive. She was expected on Tuesday to introduce a measure that would curb weapons sales to those on a narrow terrorism watch list.

Democrats’ efforts to pass a broader prohibition failed on Monday.

It was not yet clear whether Ms Collins’s plan would draw significant bipartisan support, or whether Mr McConnell would even schedule a vote on her Bill, which likely would draw opposition from the National Rifle Association (NRA).

The NRA has worked hard to defeat gun control measures, including attempts in the wake of mass shootings such as the one in Orlando.

Gun control groups promised to intensify their push for legislative action, but not just in Washington.

“If the NRA and their lapdogs in the Senate thought moms would feel dispirited and back down, they are sorely mistaken,” Ms Watts said.