Obama prepared for complete US withdrawal from Afghanistan 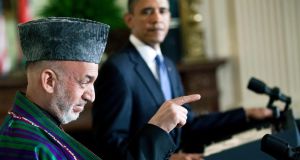 President Hamid Karzai’s refusal to sign a security deal has frustrated the White House, which has been forced to abandon an earlier demand that he sign the deal in weeks, not months. Photograph: Brendan Smialowski/Getty Images

President Barack Obama has told the Pentagon to prepare for the possibility that no US troops will be left in Afghanistan over President Hamid Karzai’s refusal to sign a joint security agreement.

The United States has said that after its formal drawdown of troops from Afghanistan by year’s end, it could leave a contingent of as many as 8,000 for counter-terrorism operations against al-Qaeda targets and to train Afghan forces.

But Mr Karzai’s refusal to sign a security deal has frustrated the White House, which has been forced to abandon an earlier demand that he sign the deal in weeks, not months.

Mr Obama told Mr Karzai in a phone call yesterday that he had given the order to the Pentagon, the White House said. Mr Obama’s phone call to Mr Karzai was the first substantive discussion between the two leaders since June.

Defence secretary Chuck Hagel was carrying the modified US position to Brussels for a meeting with Nato defence ministers that starts today. – (Reuters)