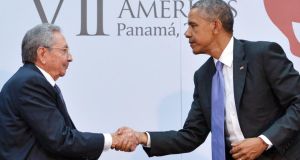 Cuban president Raúl Castro shakes hands with US president Barack Obama during a meeting on the sidelines of the Summit of the Americas in Panama City. Photograph: Mandel Ngan/AFP/Getty Images

While much of the US media focused on Mr Kerry’s predecessor Hillary Clinton and the announcement of her candidacy for the presidency in 2016, Mr Kerry spoke on three news shows a day after Mr Obama’s historic meeting with Mr Castro and a week after the conclusion of a framework agreement over Iran’s nuclear ambitions.

On Saturday night, in a long press conference in Panama City, where he had met Mr Castro on the sidelines of the Summit of the Americas, Mr Obama was asked about the Iran deal and fierce opposition to it from Republicans in Congress and around the coalescing 2016 presidential race.

The president said: “I don’t understand why it is that everybody’s working so hard to anticipate failure. My simple point is let’s wait and see what the deal is.”

Mr Obama said Mr McCain had implied the secretary of state was less trustworthy than Iran’s supreme leader, Ayatollah Khamanei, on the specifics of the framework nuclear deal, and said the Arizona senator’s comments were “an indication of the degree to which partisanship has crossed all boundaries”.

“That’s not how we’re supposed to run foreign policy,” Mr Obama said. “That’s a problem. It needs to stop.”

As the Republican-controlled Congress continues to consider ways to rein Mr Obama in over Iran, differences persist between Washington and Tehran over the interpretation of the framework agreement.

On Sunday, Mr Kerry said: “I also stand by every fact that I have laid out. It’s an unusual affirmation of our facts, to come from Russia, but Russia has said that what we’ve set up is reliable and accurate, and I will let the final agreement speak for itself.”

The Iran deal must be concluded by the end of June.

Mr Kerry will meet privately with members of the House of Representatives on Monday and the Senate on Tuesday to “lay out in full our understanding of this agreement, and if it turns out it isn’t the agreement we are not going to sign it”.

On Tuesday, the Senate foreign relations committee is due to debate a Bill sponsored by its chair, Bob Corker, a Tennessee Republican, and Bob Menendez, a New Jersey Democrat, which seeks to give Congress a say in negotiations with Iran.

Appearing on Fox News on Sunday, Mr Menendez, who has been indicted on federal corruption charges, said there was a “congressional duty to review whatever agreement comes about”.

On CBS, Mr Kerry said: “I think people need to hold their fire and let us negotiate without interference and be able to complete the job over the course of the [next] 2½ months.”

On Cuba, Mr Kerry answered criticism from leading Republicans – including presumed presidential candidate Marco Rubio, a Florida senator of Cuban descent – that engagement had been pursued despite a lack of change in the communist nation during the near 60-year US embargo.

“We have to begin somewhere,” he said, “and the president has courageously decided to change a policy that hasn’t worked and to move us down a different path.”

“The purpose of changing the policy is to encourage change and transformation. We’ve had this policy [of embargo] in place ever since the late 1950s, ever since the revolution when [Fidel] Castro came to power, and it hasn’t had the impact that people wanted.

“The belief is very powerful that by beginning to engage, by beginning to have greater ability to move, to travel and to visit, opportunities and ideas will grow, and that is what will provoke change over a greater period of time.”

Former Arkansas governor Mike Huckabee, who is believed to be exploring a second presidential run in 2016, appeared on the same ABC show to voice common and fierce Republican objections to engagement with Cuba.

“I think we need to hold Castro, both Raúl and Fidel, more responsible for the fact that they kidnapped people, they stole their property, they murdered people, they robbed them of their human rights,” he said, before calling for a “complete repudiation of the policies that have left political prisoners in place in Cuba”.

“So until there’s some recognition of basic human rights,” he said, “and some reparations made to those who have been run over by the Castro machine, no, I don’t think that sitting down, making nice and yucking it up with Raúl Castro who was involved in some murderous activities and kidnapping of Americans in the 1950s, really makes a lot of sense.” – (Guardian service)