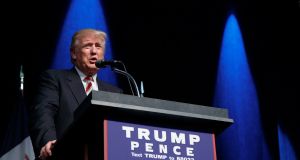 Mr Schneiderman, a supporter of Trump’s Democratic rival in the presidential race, Hillary Clinton, sued the real estate mogul and his now defunct Trump University for fraud in 2013, seeking $40 million in restitution plus penalties and other costs.

In a CNN interview on Tuesday, Mr Schneiderman said his office had now brought Mr Trump’s charitable foundation under scrutiny.

“My interest in this issue really is in my capacity as regulator of non-profits in New York state. And we have been concerned that the Trump Foundation may have engaged in some impropriety from that point of view,” the elected Democratic official said.

He added: “We have been looking into the Trump Foundation to make sure it’s complying with the laws that govern charities in New York.”

He did not elaborate on what wrongdoing Mr Trump’s nonprofit might have committed.

Mr Trump has accused Ms Clinton of being corrupted by donors to the Clinton Foundation global charity founded by her husband, former US president Bill Clinton, while she was secretary of state from 2009 to 2013.

Ms Clinton has dismissed Mr Trump’s allegation as a political smear. There has been no evidence that foreign donors to the foundation obtained favours from the state department while Ms Clinton headed the agency.

Mr Schneiderman made his remarks when asked on CNN about calls from Democrats in Congress for a federal investigation of a $25,000 (€22,295) donation in 2013 from the Trump Foundation to a political committee supporting Florida’s Republican attorney general, Pam Bondi.

Democrats have cited an Associated Press report that Ms Bondi solicited the donation personally, around the time her office was debating whether to join New York state’s investigation into Trump’s real estate training school in Florida. According to AP, Ms Bondi, who was seeking re-election at the time, broke off the lawsuit deliberations after the check arrived.

Ms Bondi, who has endorsed Trump, has called the report misleading.