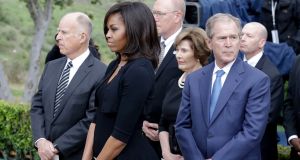 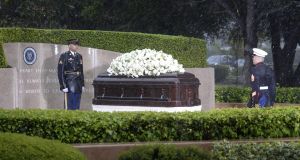 A marine pays his respects as the casket of former US first lady Nancy Reagan is placed at the grave site of her husband, former US president Ronald Reagan, in California, the US. Photograph: Mike Nelson/EPA 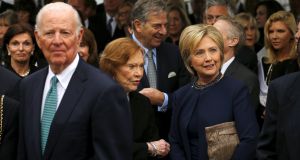 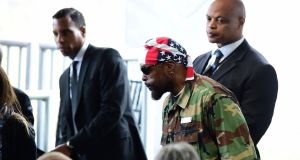 US first lady Michelle Obama and representatives from nine former presidential families led a bipartisan gathering of politicians and celebrities in paying tribute to Nancy Reagan, whose love for her late husband, Ronald Reagan, was hailed as a romance “for the ages”.

During an invitation-only funeral for about 1,000 guests at her husband’s presidential library in California, the Hollywood actor turned first lady was remembered for the fierce devotion she accorded her spouse during their White House years and his long struggle with Alzheimer’s disease.

“Theirs was a love story for the ages,” former Canadian prime minister Brian Mulroney said of the couple, during a service that Nancy Reagan herself helped plan in advance.

“They had style, they had grace and they had class.”

After her husband’s death at the age of 93 in 2004, she “dedicated herself to his memory and his place in history”, Mr Baker said.

Seated nearby was Nancy Reagan’s daughter Patti Davis and son Ron Jr, - both of whom eulogised their mother - along with Caroline Kennedy, daughter of the late president John Kennedy, and the children of his three immediate successors - Lyndon Johnson, Richard Nixon and Gerald Ford.

Davis described her mother and father as “two halves of a circle, closed tight” while her brother said that “as a couple, they were more than the sum of their parts”.

Baker said she was “absolutely without a doubt [Ronald Reagan’s] closest advisor”, and that she was particularly adept at knowing who was truly loyal to her spouse and who was not.

He credited Nancy Reagan with prodding her husband to open a dialogue with then-Soviet leader Mikhail Gorbachev, a relationship that helped ease Cold War tensions.

She could be “tough as a marine drill sergeant . . . when things weren’t going well,” Baker said.

He recalled how he only saw Nancy Reagan lose her cool once - the day in March 1980 when her husband was wounded by gunfire from a would-be assassin.

“She was devastated, and in fact, she fell apart,” he said, adding that she returned with her husband to the White House after his discharge from the hospital “with a fierce determination to protect him in every way she possibly could”.

After the service at the Ronald Reagan Presidential Library in Simi Valley ended a military honour guard carried the mahogany casket from the memorial gathering beneath a large white tent to a nearby grave site on the grounds.

Nancy Reagan, who died on Sunday of congestive heart failure at age 94, was to be buried beside her husband later on Friday.

Even the actor known as Mr T, a well-known supporter of Nancy Reagan’s “Just Say No” anti-drug campaign, was in attendance, wearing an American flag bandana on his head.