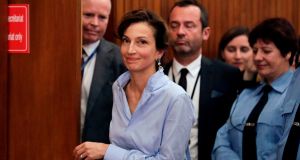 The election of Audrey Azoulay as director general of the United Nations Educational, Scientific and Cultural Organization (Unesco) on October 13th was a diplomatic coup for French president Emmanuel Macron and his belief in multilateralism.

Though Azoulay’s candidacy was a legacy from his predecessor, François Hollande, Macron took her with him to the G7 and G20 summits and the UN General Assembly, and actively campaigned on her behalf. She was chosen by Unesco’s 58-member executive council after five rounds of voting, ultimately defeating the Qatari candidate, Hamad al-Kawari, by 30 to 28 votes.

No Arab has led Unesco since its foundation in 1945, and the Arabs believed the position was rightfully theirs. But they were unable to agree on a sole Arab candidate.

Qatar gave US $10 million to the Unesco world heritage fund in 2014. “I don’t come empty-handed,” was Al-Kawari’s slogan. He invited members of the executive council on an all-expenses paid trips to Doha.

At age 45, Azoulay is a quarter century younger than the rivals she defeated. She was born in Paris to Moroccan Jewish parents and holds degrees from Sciences Po and the elite French civil service college ENA. She served as Hollande’s cultural adviser from 2014-2016, then as culture minister for the last 15 months of Hollande’s term.

Though Azoulay’s election was greeted with relief by many at Unesco, some employees expressed reservations about her relative youth and lack of diplomatic experience. Others reflected that the Qatari or Chinese candidates could have done more to relieve the organisation’s financial crisis.

The US stopped paying its 22 per cent share of the budget in 2011, when Palestine joined the organisation. Washington is now more than half a billion euro in arrears on its contribution.

By coincidence, the US and Israel announced on the eve of Azoulay’s election that they will withdraw from Unesco by the end of 2018. Both cited anti-Israel bias as the reason.

Azoulay’s election follows a now familiar pattern of Macron stepping into the vacuum left by US president Donald Trump. When Trump pulled out of the Paris climate accord, Macron vowed to “Make our planet great again”. When Trump refused to certify Iranian compliance with the nuclear agreement, Macron said he would become the first head of a western power to visit Tehran since the 1979 revolution.

Now, France has taken charge of a major UN organisation, the day after the US said it was leaving.

Unesco has been a political battleground between Israel and Palestinians for decades. In an opinion piece published by Le Figaro, Gilles-William Goldnadel, president of the France-Israel Association, said the West was guilty of “the suicidal abandonment of its own Judeo-Christian culture”. He enumerated a long list of grievances with Unesco, starting with its refusal to mention the Holocaust in a 1995 resolution marking the 50th anniversary of the end of the second World War.

Last summer, the naming of Hebron, in the Israeli-occupied West Bank, as a World Heritage site in “Palestine” enraged the Israelis. “There is no US veto at Unesco, so resolutions about Jerusalem and the occupied territories get passed every time,” says a high-ranking civil servant at Unesco. “Most countries vote in favour of these resolutions, because they support the Palestinian cause. Unesco mirrors world opinion. It’s an accurate reflection of geopolitics.”

Azoulay’s father, André Azoulay, has been an adviser to two generations of Moroccan monarchs, and is credited with having established back channels between Arab and Israeli leaders. But it is probably too much to hope that Audrey Azoulay will succeed where her predecessors at Unesco failed, at calming Israeli-Palestinian passions.

Nearly 50 Arab cultural figures from 14 countries signed a petition demanding that Macron reconsider Azoulay’s candidacy. “François Hollande has imperilled France’s close relationship with the Arab world by giving this gift to Madame Azoulay,” warned the Egyptian writer Mohamed Salmawy, one of the leading signatories. The fact that Azoulay is Jewish was considered further proof of Hollande’s “clumsiness”, L’Obs magazine reported.

The Israeli-Palestinian conflict is one of many political and historical quarrels that Azoulay will seek to defuse. South Korea has just blocked the appointment of an Iranian to a high position, because it accuses Iran of helping the North Korean nuclear programme.

Japan has withheld its substantial budgetary contribution this year because it is furious that documents concerning the Nanking massacre and the exploitation of “comfort women” during the second World War have been considered for the Memory of the World Register. Now Japan has upset other members by asking that the diaries of kamikaze pilots be included.

The register includes undisputed treasures, such as the Gutenberg Bible and the Book of Kells. “This seemingly nice programme quickly became very political,” laments a source inside the organisation. “But how can you reconcile countries, when Unesco reflects what is happening in the world?”