George Weah leading presidential race, but any link to war criminal likely to do harm 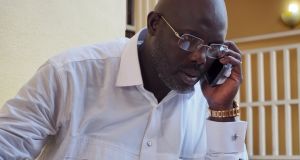 There’s a kerfuffle in the court of King George. Ex-soccer star George Weah, who is leading the race to become Liberia’s next president, has just issued a clear message to war criminal Charles Taylor – and his aides are not happy.

“Liberia is moving on. I wish you all the best,” he says, his words aimed directly at Taylor. Several of his staff rush forward to cut short the interview with The Irish Times. But Weah rebukes his entourage, insisting he has nothing to hide.

“They can’t link me with Charles Taylor,” he says.

Not that rumoured links with the country’s former president, locked up in a high-security British jail for war crimes in neighbouring Sierra Leone, have dented the popularity of the soccer ace, commonly known as King George by locals.

Provisional results in Tuesday’s election, released on Friday, show his Coalition for Democratic Change leading in 12 of the nation’s 15 counties. While it is still too early to say whether he will gain an outright majority, he looks set to cruise into a November run-off against incumbent vice-president Joseph Boakai.

His success thus far is due, at least in part, to his controversial alliance with Taylor’s ex-wife, Jewel Howard-Taylor, which has attracted abundant support from Bong County, formerly Taylor’s rebel HQ, where he is still viewed as a freedom fighter by many.

It was Taylor’s 1989 invasion from Ivory Coast that ended the decade-long dictatorship of Samuel Doe, but his intervention unleashed a 14-year civil war of apocalyptic depravity that ended in 2003, killing a quarter of a million people. Taylor served as president from 1997 to 2003.

Speaking in the yard of his modest home on Rehab Road in Paynesville suburb, Weah is confident that he can get the struggling country up and running again. The post-war economy, based largely on foreign aid and exports of iron ore, rubber and diamonds, briefly surged, with GDP growth hitting a high of 8.7 per cent in 2013, but it was hit by a double whammy of plummeting commodity prices and Ebola in 2014.

“I will do it honestly,” he says, referring to the accusations of graft that have beleaguered the administration of outgoing president Ellen Johnson Sirleaf. He promises to build roads, reduce taxes and to ensure the entire country has access to the electricity grid within two years.

Bringing so-called “big light” to the country may be challenging, given that it has just taken five years to restore a hydropower plant destroyed by Taylor’s rebels in the war, which is reportedly projected to supply only 115,000 households and businesses by the end of this year. Liberia has a population of 4.6 million.

“The country has expectations and we have responsibilities,” says Weah. “We can achieve it.”

Weah, who has been targeted by opponents over his perceived lack of formal education, is the first to admit that economics is not his strong suit – “I will recruit the best economist in the country and he will do the job,” he says – but he is certain his experience as a global soccer star will serve the country.

“My international experience taught me to be a team player, to be resilient and committed. Whether through my work with the UN, Unicef or as a soccer player, I know all about hard work,” he says. “Everything I say I’ll do, I do it.”

Weah’s political awakening began in the mid-1990s, when he met Nelson Mandela, who hailed him as the “the pride of Africa”. Inspired, he became more vocal about the war, advocating UN intervention. Shortly afterwards, his house on 9th Street in the upmarket Sinkor neighbourhood was torched by Taylor’s rebel groups. Two of his cousins were raped. This makes the allegations of chummy phone calls with Taylor especially perplexing.

Weah, who is on public record both admitting to and denying the allegations, tells the The Irish Times he did take one call from Taylor, when someone nearby handed him a phone, asking whether he wanted to “say hello”.

“So I took the call,” he says. “As I would have taken a call from anybody.”

Later, anxious to smooth over the earlier misunderstanding, Weah’s PA takes The Irish Times to the slum where he grew up. It was in Clara Town that Weah started playing soccer with a rag ball. It is raining heavily and the air is heavy with the smell of the latrines, which empty directly into the nearby swamp – this in turn spills over on to the mud paths. “George lived this life too,” says the PA.

“He’s a rare example of someone who made it from Clara Town to Sinkor, the guy who played football, an activity the elite looked down on.” he adds.

Near the shops, there is a colourful mural of “Ambassador Weah”, a reference to his humanitarian work with Unicef, the UN children’s fund, when he would visit his fellow Liberians in refugee camps across West Africa.

Weah’s sister, Yvonne, still lives in the little green house where they grew up with “the old ma”. “He was a quiet boy, who kept himself to himself,” she says. There are no plans to move out of the house. Weah is still attached to the place and visits regularly.

It is clear that people in Clara Town are fiercely loyal to their most famous son. Last July, local youths threw stones at vice-president Joseph Boakai, Weah’s main rival in the presidential contest, when he came here to campaign. “CDC is in!” shout some women, in reference to Weah’s Congress for Democratic Change party. Boakai’s Unity Party, they say, is “on the drip”.

Back at his home, Weah is keen to demonstrate his patriotism. “I have a love for my country, a love for my people. During the war I was there for them. I want to help people to succeed,” he says.

That King George is trusted by a large number of Liberians is not in doubt. Should he eventually become president, though, his initial challenges may lie abroad. As one diplomatic source put it, “he will have to work quite hard on perceptions of links to ... Taylor. There will be repercussions on his relationships with other countries”.

For a country still heavily dependent on foreign aid, this may matter. A lot.

1 Trump refuses to commit to peaceful transfer of power if he loses election
2 'The next 10 days are critical' - NPHET warns young people are ending up in ICU
3 Swedish expert backtracks on herd immunity for Ireland
4 Clampers used unauthorised ‘spotter workaround’ for higher bonuses
5 Miriam Lord: Micheál has Mary Lou pegged as a street angel and House devil
Real news has value SUBSCRIBE