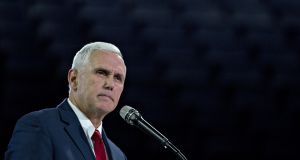 US Republican vice-presidential candidate Mike Pence vigorously defended running mate Donald Trump against allegations of sexual misconduct and promised that evidence casting doubt on the claims would come out on Friday.
Mr Trump’s campaign has been scrambling to recover from the release a week ago of a 2005 video in which he bragged about groping women and making unwanted sexual advances. While Mr Trump said the video was just talk and he had never behaved in this way, multiple women subsequently went public with allegations of sexual misconduct against the New York real estate magnate going back three decades.
Mr Trump furiously denied the allegations on Thursday, saying that the New York Times, which published two women’s claims, and other media, along with his Democratic rival Hillary Clinton, were engaged in a vicious campaign to stop him from winning the November 8th election.
The Wall Street Journal reported on Friday that Mr Trump was set to add Mexican billionaire Carlos Slim to his targets, citing a Trump adviser as saying the candidate would accuse Slim of helping to generate reports of the sexual misconduct.
Mr Trump will claim that Mr Slim, as a donor to the Clinton Foundation charity who also holds a large stake in the New York Times, has an interest in helping her White House campaign, the newspaper cited the adviser as saying.
His allegations, which the Journal said were expected as early as Friday, would feed into Trump’s claims of a rigged election system and “false smears” that he says are part of a conspiracy bent on defeating him.
A spokesman for Mr Slim, Arturo Elias, told the Journal that the allegations Mexico’s richest man was interfering in the US election were “totally false”. Reuters could not immediately reach Mr Slim’s spokesman for comment.
The Trump campaign did not immediately respond to Reuters’ requests for comment on the Journal report.
New York Times publisher Arthur Sulzberger Jr said in a statement, “Carlos Slim is an excellent shareholder who fully respects boundaries regarding the independence of our journalism. He has never sought to influence what we report.”
Personal assurance
Mr Pence, the conservative Indiana governor, said Mr Trump had assured him personally the allegations of sexual misconduct were false. “I do believe him,” he told the CBS This Morning programme.
“Before the day is out, there’ll be more evidence publicly that calls into question these latest allegations,” Mr Pence said.
“Stay tuned. I know there’s more information that’s going to be coming out that will back his claim that this is all categorically false.”
Mr Pence told NBC’s Today show that the evidence could be just “hours” away from being made public.
In several morning television interviews on Friday, Mr Pence tried in vain to shift the debate to Clinton, her family’s charity and information from the hacked emails of her campaign manager, John Podesta.
The New York Times reported on Wednesday that two women said they had endured unwanted groping or kisses from the former television personality. Several other women made allegations of sexual aggression by Mr Trump in various media outlets following that report.
The newspaper said on Thursday it stood by its story and rejected charges the article was libelous after a lawyer for Mr Trump threatened legal action and demanded a retraction.
The allegations of sexual misconduct have been a turning point for some in the party who were already uneasy about backing Mr Trump’s unorthodox campaign, and a string of Republican officials have distanced themselves from him.
Mr Trump’s controversial proposals have included building a wall along the Mexican border and temporarily banning Muslims from entering the country. His demeaning comments about women during the campaign had already dented his support among women.
Mr Trump has slipped further back from Ms Clinton in national opinion polls in the past week. A Reuters/Ipsos survey this week showed one in five Republicans thought Mr Trump’s comments about groping women disqualified him from the presidency. The poll showed him 8 percentage points behind Ms Clinton among likely voters.