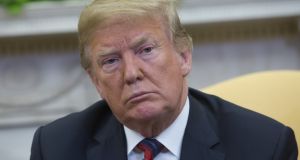 US president Donald Trump: After winning by warning voters they were being suckered, he’s made them all suckers. Photograph: Chris Kleponis

Con artists have always been slithering around. Huckleberry Finn tangled with flimflam men on Mississippi riverboats. There was a flirty snake-oil salesman in Oklahoma! And Marian the Librarian fell in love with a charming charlatan, professor Harold Hill, in The Music Man.

It was all part of an amusing American tradition of rapscallions doing their little side hustles. But now narcissistic con artists are dominating the main stage, soaring to great heights and spectacularly exploding. We have one running amok in the Oval. And we have one who finally turned himself in at a Tribeca police station Friday. Shakespeare in Love was good. But Harvey in handcuffs was great. Harvey Weinstein spent many years prosecuting his nefarious schemes against women before women ensured his prosecution.

Elizabeth Holmes shot to fame as the youngest female self-made billionaire after she dropped out of Stanford at 19 and then founded the company that became Theranos. She claimed to have created an easier, cheaper way to do blood tests, just by pricking a finger, but then it turned out she was a literal bloodsucker, defrauding investors of $700 million on a nonexistent technology. As Maria Konnikova wrote in her book, The Confidence Game, “The whirlwind advance of technology heralds a new golden age of the grift. Cons thrive in times of transition and fast change” when we are losing the old ways and open to the unexpected.

We are easy marks for faux Nigerian princes now, when chaos rules, the American identity wobbles, and technology is transforming our lives in awe-inspiring and awful ways. Trump voters allowed themselves to believe they had a successful billionaire who knew the art of the deal when he only knew the art of the con. They bought his seductive campaign narrative, that the system was rigged and corrupt and only he could fix it. After winning by warning voters they were being suckered, he’s made them all suckers.

Those who ignored whispers about Weinstein’s grotesque behaviour burned to believe that Hollywood was more than juvenile comic-book movies, that it could still make classy, sophisticated films with great roles for mature actresses like Meryl Streep and Judi Dench. And despite tales of misogyny and sickening transgressions, they wanted to buy Harvey’s grand narrative, that he was a liberal feminist who could raise enough money to help elect the first woman president. With Holmes, people were longing for a young woman to break into the club of boy geniuses conjuring unicorns.

She played to that, imitating Steve Jobs by wearing a black turtleneck and driving a car with no licence plate. She pitched a Jobs-like mythic story about her company, that it was not merely about making money, it was designed to be “the most important thing humanity has ever built.” High-minded elites like to scornfully say that Trump voters fell for his scam because they were ignorant and racist. But the high-minded elites fell for Holmes’s scam, even the fake deep authoritative voice she put on. Her board had George Shultz, Henry Kissinger, Jim Mattis and David Boies; Rupert Murdoch and Robert Kraft were investors.

“It’s a controversial thing to say now, but Holmes wowed all these older men and wrapped them around her finger with her charm and youth and good looks and cool vision,” says John Carreyrou, the Wall Street Journal reporter who broke the scam story and who wrote a book, Bad Blood, about it. Carreyrou says Silicon Valley has always had “a flimflam element” and a “fake it ‘til you make it” ethos, from the early 1980s, when it was selling vaporware (hardware or software that was more of a concept or work in progress than a workable reality).

“We’ve been lionising and revering these young tech entrepreneurs, treating them not just like princes and princesses but like heroes and icons,” Carreyrou says. “Now that there’s a backlash to Silicon Valley, it will be interesting to see if we reconsider this view that just because you made a lot of money doesn’t necessarily mean that you’re a role model for boys and girls.”

But the high-minded elites fell for Elizabeth Holmes’s scam, even the fake deep authoritative voice she put on

Jaron Lanier, the scientist and musician known as the father of virtual reality, has a new book out, Ten Arguments for Deleting Your Social Media Accounts Right Now. He says the business plans of Facebook and Google have served to “elevate the role of the con artist to be central in society”.

“Anytime people want to contact each other or have an awareness of each other, it can only be when it’s financed by a third party who wants to manipulate us, to change us in some way or affect how we vote or what we buy,” he says. “In the old days, to be in that unusual situation, you had to be in a cult or a volunteer in an experiment in a psychology building or be in an abusive relationship or at a bogus real estate seminar.

“But now you just need to sign on to Facebook to find yourself in a behaviour modification loop, which is the con. And this may destroy our civilisation and even our species.”

Lanier worries, now that tech has lost its halo, that there is nothing optimistic to replace it. “We don’t believe in government,” he says. “A lot of people are pissed at media. They don’t like education. People who used to think the FBI was good now think it’s terrible. With all of these institutions the subject of ridicule, there’s nothing – except Skinner boxes and con artists.”