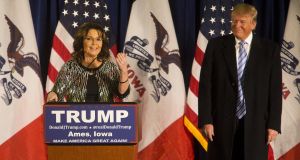 Sarah Palin and Donald Trump: “When Palin turned out to be utterly unqualified and unintelligible, spouting her own special Yoda-like language, it did not reflect poorly on women as a whole – only on her and John McCain.” Photograph: Cassi Alexandra/Bloomberg

It’s a tough call to figure out which place is more benighted: Hollywood or Saudi Arabia. Saudi Arabia was pulling ahead with all its beheadings and its top cleric’s fatwa on chess as “the work of Satan”. But then Hollywood took the lead with its Jim Crow Oscars, Scully being offered half of Mulder’s pay for the X-Files reboot and its second-class treatment of Rey – the scrappy heroine of Star Wars: The Force Awakens.

Rey, played by Daisy Ridley, embodies the awakening Force. Yet even the director, JJ Abrams, called it “preposterous and wrong” that Rey’s action figure was missing in action from some game and toy tie-ins – a traditionally male realm. And Lucasfilm is run by a girl action figure, Kathleen Kennedy, so go figure.

That is why it’s so inspiring to see a woman out on the campaign trail who has had such a historic impact on feminism, helping to recast outmoded assumptions about women. Yes, Sarah Palin, I’m giving you a shout-out.

Before Palin, if a woman flamed out in a spectacular fashion, it was considered an X through the X chromosome. If Billie Jean King had lost to Bobby Riggs, women would be seen as second-class athletes.

If Geraldine Ferraro seemed unfit for the White House, all women might be judged incapable.

But when Palin turned out to be utterly unqualified and unintelligible, spouting her own special Yoda-like language, it did not reflect poorly on women as a whole – only on her and John McCain.

What the hell were you thinking, senator? Ordinarily, it’s considered sexist to call a woman shrill, but Palin liberated us on that score. She really is shrill.

Ordinarily, it’s dicey to focus on what a woman in politics is wearing. But again, Palin has freed us up. She sported a cardigan so gaudy and rogue at her Iowa endorsement of Donald Trump (the man who viciously mocked her former running mate’s war record) that we would be remiss not to mention that it was the sartorial reflection of Palin and Trump themselves.

Ordinarily, you have to tread gingerly in critiquing a working woman on her mothering skills. But Palin’s brawling brood runs so wild around the state she once governed, in a way that is so contrary to her evangelistic, sanctimonious homilies on family values, that it seems only Christian to advise her to study the Obamas to see what exceptional parenting looks like.

With Palin and Trump, a failed reality star and a successful one, gall is divided into two parts. There has been a lot of talk this campaign season about how female pols bring superior qualities to the table: collegiality and listening skills.

Sarahcuda though shows that we are truly the equals of men, capable of narcissistic explosions, brazen hypocrisy and unapologetic greed. She had barely finished the endorsement last Tuesday when she began using it to raise money for SarahPAC, so she can take her show on the road.

Her oldest son, Track, was a kid with a temper before he served in Iraq for a year, conveniently shipping off in the autumn of 2008 as his mother began her hockey-mom spiel.

The 26-year-old was arrested on Monday on an assault charge, accused of punching his girlfriend in the face and kicking her during an alcohol- fuelled argument at the Palins’ home in Wasilla, Alaska. His girlfriend told the police that he was also waving around an AR-15 assault rifle.

Instead of just admitting that her family is a mess, Palin exhibited Trump-like swagger, conjuring a story in an attempt to gin up the crowd and occlude her son’s behaviour. She used the last refuge of scoundrels in Tulsa, Oklahoma, on Wednesday, wrapping herself in patriotism.

In her convoluted, disingenuous way, she charged President Barack Obama with a lack of “respect” for veterans and suggested that Track had post- traumatic stress disorder and became “hardened”, implying this is what led to the incident prompting his arrest.

This from the archconservative who presents herself as a model of personal responsibility and scourge of victimhood?

Outraged vets urged Palin not to reduce PTSD to a political “chew toy”, as one put it, or to excuse domestic violence by citing the disorder.

The rattle-brained Palin has reversed her Iraq position, so that now her stance somehow matches Trump’s consistent and prescient one against the Iraq invasion.

When she saw Track off to Iraq in 2008, she echoed W’s specious argument, calling the war a “righteous cause” to avenge “the enemies who planned and carried out” 9/11.

However, in her endorsement of Trump, she praised Rand Paul, who thinks we should have left Saddam Hussein in place, and argued that America should stop “footin’ the bill” for oil-rich nations and “their squirmishes that have been going on for centuries, where they’re fightin’ each other and yellin’ ‘Allah akbar’, calling jihad on each other’s heads for ever and ever.”

Hillary Clinton is presenting herself as the embodiment of women, an American Marianne, pushing her gender in an all-for-one-one-for-all, now-or- never way. She’s even campaigning this week in Iowa with Billie Jean King.

Women should support her because if she founders, it will be bad for women. One Democratic senator said privately that many Democrats believe that Hillary is still the presumed nominee only because she is a woman.

Palin though has done us a favour by proving that a woman can stumble, babble incoherently on stage and spew snide garbage – and it isn’t a blot on the female copybook. It’s all on her. Can I get a hallelujah? – (New York Times service)