Maureen Dowd: Can Jeb ‘45’ Bush really be his own man?

The neocons are swirling around Jeb, ready to inhabit another president Bush 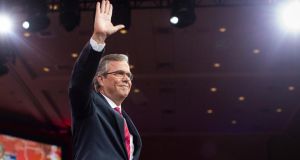 Jeb Bush: though he is more apt to do his homework, he’s unformed on foreign policy, like his brother – except that his brother was elected before 9/11. Photograph: Jabin Botsford/New York Times

James Baker can take credit for two presidencies and one vice-presidency in the Bush family. So it’s a tad ungracious for a Bush to take Baker to task.

At first Jeb Bush tried to distance himself from Baker distantly. He had his spokeswoman, Kristy Campbell, send an email to reporters the day after Baker – one of his foreign policy advisers and his dad’s best friend, campaign manager and secretary of state – gave US president Barack Obama some bipartisan backup on Israel.

Speaking to liberal Israel advocacy group J Street, Baker faulted the “diplomatic missteps and political gamesmanship” surrounding Binyamin Netanyahu. Baker’s criticism of the abrasive Israeli leader he once banned from the state department sparked a furore among Republicans who want a loyalty oath on support for the Jewish state.

Bill Kristol, editor of the Weekly Standard and one of the neocon enforcers who agitated for George W Bush’s blighted invasion of Iraq, threw down the tweet gauntlet the next morning: “James Baker & J Street. The anti-Israel pre-Reaganite GOP meets the anti-Israel post-Clinton left.” He also tweeted: “Whether Jeb disavows James Baker, & how quickly and strongly, could be an oddly important early moment in GOP race.”

An email from Jeb’s nascent campaign crew based in Florida was not going to cut it. So Jeb personally grovelled to his sceptical base on Thursday in Texas, telling Brian Kilmeade on Fox News Radio that Baker “has a different view. I did not believe it was appropriate to go speak to J Street, a group that basically has anti-Israeli sentiments, but I have a vast array of people advising me, and I’m honoured that Jim Baker is doing so. The fact that I have people that I might not agree with on every subject advising me shows leadership, frankly. I don’t think we need monolithic thinking here.”

Second, the “monolithic thinking” is a cut on Kristol and other neocon masters of monolith who egged Bush into a war in Iraq that has been so long and bloody and awful that James Jeffrey, Obama’s former ambassador to Iraq, told Michael Crowley of Politico that “we’re in a goddamn free fall here”.

Thanks to the grandiosity and naivety of W, Dick Cheney, Donald Rumsfeld and Paul Wolfowitz, US Middle East policy is so muddled that, after occupying Iraq, we are working with Shiite Iran to push back Sunni insurgents in Iraq and working with Sunnis and their Saudi Arabian allies in Yemen against a Shia militia that has Iranian support.

Jeb, or “45,” as he is already being called, hasn’t even announced, and we’re already trapped in the Byzantine psyche of Bushworld. Middle East policy was one of several ways W proved he was his “own man” by using his father as a reverse playbook. HW and Baker sensibly avoided occupying Iraq and then tried to leverage the gratitude of Arab countries to make a deal at the Madrid peace conference. When Israel rebuffed them, they stood tough on settlements, even though President Bush’s support among American Jews nose-dived.

Because Karl Rove and W believed that winning a larger share of the Jewish vote would help secure the second term his father failed to get and because 43 sympathised with Israel’s vulnerability to terrorism, W preferred to go easy on Israel.

Though Jeb is more apt to do his homework, he’s unformed on foreign policy, like his brother – except that his brother was elected before 9/11. Now the neocons who treated W like a host body for their own agenda are swirling around Jeb, ready to inhabit another President Bush.

Jeb wants it both ways. His litany of foreign policy advisers is a list divided against itself. He wants the money and dynastic privilege that comes with his name, even as he insists he’s a fresh slate. He had better pray that he doesn’t end up in a presidential vote recount as his brother did here in 2000, because then Jeb would really need Jim Baker.