After meeting survivors and families of victims killed in the mass shooting in Orlando, President Barack Obama urged people to support the restriction of access to dangerous assault weapons. Video: REUTERS

Donald Trump has told a crowd of supporters in Dallas, Texas that he will save the Second Amendment, protecting the right to bear arms, in the wake of the Orlando shooting that left 49 people killed. Video: REUTERS 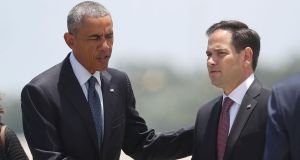 US president Barack Obama shakes hands with senator Marco Rubio (R-FL) after they arrived at the Orlando International Airport to visit with family and community members after the attack at the Pulse gay nightclub. Photograph: Joe Raedle/Getty Images

US president Barack Obama spoke emotionally on a visit to Florida four days after the nightclub massacre, calling Orlando a city “shaken by an evil, hateful act”.

Speaking at a makeshift memorial in downtown Orlando to the 49 victims of Sunday’s mass shooting, the worst in modern US history, Mr Obama urged lawmakers to pass legislation to end the scourge of gun attacks, saying that the relatives of the dead had pleaded with him to take action.

“Our politics have conspired to make it as easy as possible for a terrorist or even just a disturbed individual to buy extraordinarily powerful weapons, and they can do so legally,” the president said after meeting the families of the victims.

“Today, once again, as has been true too many times before, I held and hugged grieving family members and parents and they asked, ‘Why does this keep happening?’ They pleaded that we do more to stop the carnage. They don’t care about the politics. Neither do I.”

The president acknowledged the complexity of protecting the country from homegrown terrorists but said action could be taken to reduce the damage they can do by having easy access to high-calibre military-style assault weapons.

“When you have lone-wolf attacks like this etched in the minds of a disturbed person, then we’re going to have to take different kinds of steps,” said Mr Obama.

“Those who were killed and injured here were gunned down by a single killer with a powerful assault weapon.”

It may not be possible to “catch every single deranged person,” he said, but something can be done about “the amount of damage that they do”, referring to changes that can stop terrorists getting hold of high-powered weapons.

Mr Obama spoke after laying 49 white roses at the memorial, one in honour of each of the victims, following a two-hour meeting with families of the victims and the survivors of Sunday’s attack as well as staff from the nightclub.

Mr Dyer showed the president an “Orlando United” T-shirt, with a heart-shaped rainbow, after he descended the steps of the aircraft.

Mr Obama held a private meeting with relatives of the victims at the Amway Centre, an indoor sports and entertainment venue in downtown Orlando.

Speaking after meeting Mr Obama and Mr Biden, Vincent Villafane De Jesus, cousin of Frankie Jimmy De Jesus Velazquez – who, at 50, was the oldest victim of the Pulse nightclub massacre – said that Mr Biden hugged the victim’s mother and said, “You are not alone – we stand by you.”

Mr Obama looked into his aunt’s eyes and felt her pain, he said.

“You cannot describe that emotional moment. We are very thankful for the support that they gave us, to the families, all the victims, and we are together in this,” said Mr De Jesus before his aunt fainted surrounded by a scrum of reporters in the searing Florida heat.

It emerged yesterday that Mateen exchanged text messages with his wife during the rampage.

He texted her at about 4am, two hours into the attack, asking if she had seen the news of the attack.

His wife, Noor Salman, texted him at another point saying she loved him. She also tried calling her husband several times during the massacre, US media reported.