‘Sue if you must,’ says lawyer for former Republican consultants who made ads 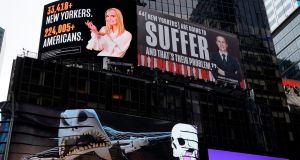 The billboard by The Lincoln Project in Times Square on October 25th. Photogrpah: Timothy A Clary/AFP via Getty

The Lincoln Project “will not be intimidated by empty bluster”, a lawyer for the group wrote late on Saturday, in response to a threat from an attorney for Ivanka Trump and Jared Kushner over two billboards put up in Times Square.

“Sue if you must,” Matthew Sanderson said.

Mr Kushner is shown next to the quote “[New Yorkers] are going to suffer and that’s their problem”, above a line of body bags. Ms Trump is shown gesturing, with a smile, to statistics for how many New Yorkers and Americans as a whole have died.

The Lincoln Project is a group of former Republican consultants who have made it their mission to attack Donald Trump and support Joe Biden.

On Friday, Marc Kasowitz, an attorney who has represented the president against allegations of fraud and sexual assault, wrote to the Lincoln Project, demanding the “false, malicious and defamatory” ads be removed, or “we will sue you for what will doubtless be enormous compensatory and punitive damages”.

The Lincoln Project responded that they would not remove the billboards, citing first amendment rights of free speech and the “reckless mismanagement of Covid-19” by the Trump White House.

In a legal response on Saturday night, attorney Matthew Sanderson told Mr Kasowitz: “Please peddle your scare tactics elsewhere. The Lincoln Project will not be intimidated by such empty bluster … your clients are no longer Upper East Side socialites, able to sue at the slightest offense to their personal sensitivities.”

Due to a “gross act of nepotism”, Mr Sanderson wrote, citing supreme court precedent and “substantial constitutional protections for those who speak out”, Ms Trump and Mr Kushner have become public officials whom Americans “have the right to discuss and criticise freely”.

Mr Kasowitz claimed Mr Kushner “never said” the words attributed to him on the billboards, and Ms Trump “never made the gesture” she is shown to make.

The “bruised self-image” of the president’s daughter, Mr Sanderson wrote, “does not change the fact that this billboard accurately depicts her support of a federal response that has utterly failed to prevent an unmitigated tragedy for the United States”.

“May I suggest,” he added, “that if Mr Kushner and Ms Trump are genuinely concerned about salvaging their reputations, they would do well to stop suppressing truthful criticism and instead turn their attention to the Covid-19 crisis that is still unfolding under their inept watch.

“These billboards are not causing [their] standing with the public to plummet. Their incompetence is.”

A footnote to Mr Sanderson’s letter cited “one of the seminal libel-proof plaintiff cases”, that of a well-known mobster whose reputation was “so tarnished … he could claim no damages for defamation”.

“Mr Kushner and Ms Trump’s claims will fare no better than Boobie Cerasini’s given their tarnished reputations on Covid-19,” it said.

Mr Sanderson also said “this isn’t over” and added: “Sue if you must.”

As University of Richmond law professor Carl Tobias has said that seems unlikely. Trump “has honed litigation abuse, as a business person and president, to an art form”, Mr Tobias said. But “if they did sue, the litigation might take years to resolve, be expensive and lead to embarrassing revelations … suits like this by people who have thrust themselves into the public eye are notoriously difficult to win.

“In short, this appears to be the usual Trump family bluster.” – Guardian