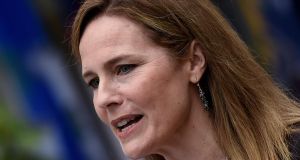 The US Senate is expected to vote on Amy Coney Barrett’s nomination to the supreme court on Monday, as a key procedural hurdle was cleared when the 100-member chamber voted on Sunday to move ahead, by 51-48.

A vote is expected to be held on Monday evening after 30 hours of debate.

Republican efforts to confirm a third supreme court justice under Donald Trump’s presidency received a significant boost on Saturday when senator Lisa Murkowski said she would vote to confirm the 48-year-old judge, despite her previous opposition to confirming a justice so close to an election.

In a speech on the Senate floor, she said she had “frankly, lost the procedural fight” and would evaluate Ms Barrett “as we would want to be judged”.

Democrats decried the process that has left Mr Trump on the cusp of appointing a third justice to the nine-member court just a week from the presidential election. Senate majority leader Mitch McConnell famously blocked former president Barack Obama’s nominee to replace the late Antonin Scalia in early 2016 from securing a hearing, arguing at the time that an appointment should not be made in an election year.

Ms Barrett, who has been a judge since 2017, when she was nominated by Mr Trump to serve on the federal appeals court, based in Chicago, was previously an academic at the University of Notre Dame. Ms Barrett, a practising Catholic and a favourite of conservative groups such as the Heritage Foundation, was probed on her personal views during her confirmation hearing. She pledged to follow the constitution as written if confirmed.

The appointment of a supreme court justice so close to an election is unprecedented. Members of both parties have been running ads featuring Ms Barrett’s confirmation, with Democrats warning that abortion and contraception rights, as well as the Affordable Care Act, will be threatened.

But Republican senators such as Lindsey Graham of South Carolina and Joni Ernst are hoping that her confirmation will help motivate conservative voters in their home states as they face tough re-election fights.