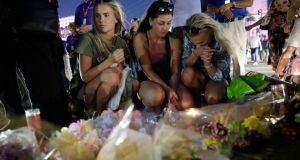 People at a memorial for victims of the mass shooting in Las Vegas. Photograph: AP Photo/John Locher

US authorities have turned their focus to Marilou Danley, the girlfriend of Las Vegas gunman Stephen Paddock, as they struggle to establish a motive behind the deadliest mass shooting in US history.

Ms Danley arrived at Los Angeles airport late on Tuesday night on a flight from the Philippines. She was pictured being escorted through a side exit of the airport in a wheelchair, accompanied by security officials.

In an interview with Australia’s Seven Network, Ms Danley’s two sisters said they believed that Paddock had bought their sister a flight to the Philippines before the events of Sunday.

“She was sent away. She was sent away so that she will be not there to interfere with what he’s planning,” one of Ms Danley’s sisters told the TV network from her home in Australia’s Gold Coast region. “In that sense, I thank him for sparing my sister’s life,” she said, adding that Ms Danley was “really in love with Steve”.

“She’s a good person, a gentle soul, a mother, a grandmother, a sister, a friend,” the sister said, adding that Ms Danley was having trouble coping with the tragedy because “she’s a very weak person”.

Police declined to comment on reports that Paddock, a high-stakes gambler, had recently transferred $100,000 to a bank account in the Philippines.

Sixty-two year-old Danley was married to American citizen Gerry Danley, her second husband, for more than 20 years, divorcing in 2015. The couple lived in Memphis, Tennessee before moving to Nevada, where she is believed to have met Paddock.

As investigators tried to piece together a picture of Paddock, few details came to light about the man who committed the biggest mass murder in US history on Sunday. Described by some acquaintances as a multi-millionaire, Paddock was a high-stakes gambler, who also had real estate interests across the United States. He had no children, and is understood to have shared his home in a retirement residential centre in northern Nevada with Ms Danley.

Paddock’s brother Eric has been the only member of the family to publicly speak about this brother’s actions. Speaking at his home in Florida earlier this week, he expressed shock that his brother had committed the atrocity at the Mandalay Bay hotel on Sunday.

As police continued to search for a motive for the killing, officials confirmed that 47 weapons belonging to the suspect had now been seized by police in three separate locations – the Mandalay Bay hotel suite from where Paddock launched his attack, and two homes he owned in Verde and Mesquite, Nevada. The firearms had been purchased in Nevada, Utah, California and Texas, special agent Jane Snyder told a press conference. In addition, 12 guns found in the hotel room had been fitted with bump fire stocks – equipment which can simulate machine gun fire.

As the identity of the victims of the attacks continued to emerge, officials confirmed that a member of the Las Vegas police force was among the dead.

Charleston Hartfield, an off-duty officer who had been attending the concert with his wife, had been killed, leaving behind two children, undersheriff Kevin McMahill told a news conference. “He ultimately gave his life protecting others,” Mr McMahill said. “We are very grateful for his sacrifice.”

Meanwhile, victims of Sunday night’s shooting began arriving to a designated area close to the site of Sunday night’s atrocities near the Mandalay Bay hotel, to pick up cars and vehicles that they left behind as the chaos unfolded.

“One of the most striking visuals was the sheer amount of personal items left behind as people fled from the terror – including vehicles,” Mr McMahill said, as he encouraged people who had attended the concert to return to designated areas with their ID in order to reclaim their items.

Speaking at the University Medical Center in Las Vegas where he met patients, Mr Trump described the gunman as “a very sick man” and “a very demented person”. But he said there was not yet information about his motives. “You will know very soon if we find something. We’re looking very, very, hard.”