Trump sticks firmly to the script on visit to Las Vegas

After PR disaster in Puerto Rico, White House taking no chances at scene of gun attack 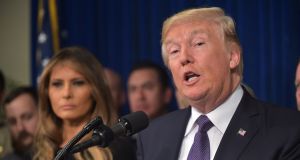 US president Donald Trump’s speech at the Metropolitan Police Department in Las Vegas on Wednesday had all the hallmarks of a well-prepared White House media event. Photograph: Mandel Ngan/AFP/Getty Images

A day after US president Donald Trump and his wife Melania visited the hurricane-ravaged territory of Puerto Rico, the president and first lady arrived in Las Vegas to meet with victims of Sunday’s deadly gun attack.

With Mr Trump’s behaviour in Puerto Rico the previous day raising eyebrows (the president was filmed tossing paper towels to a crowd in a church, while also boasting that his administration has done a “tremendous job” of handling the crisis), all eyes were on how Mr Trump would handle his second high-profile visit to a crisis scene in two days.

Mr Trump arrived at McCarran International Airport in Las Vegas, less than two miles from the scene of Sunday’s tragedy, shortly after 9.30am. His motorcade paused briefly outside the Mandalay Bay Hotel, from where the gunman launched his deadly attack, before continuing to University Medical Center where he met with victims and hospital staff for more than 90 minutes. From there he headed to Metro Police headquarters to meet with law enforcement officials and first responders who were at the front line of Sunday’s crisis.

Unlike Puerto Rico, where Mr Trump spoke off the cuff, allowing him to wade into contentious territory, the president delivered a tight, scripted speech, reading from prepared remarks.

The press conference at police headquarters had all the hallmarks of a well-prepared White House media event. “America is truly a nation in mourning,” he said. “In the months ahead we will all have to wrestle with the horror of what has unfolded this week, but we will struggle through it together. We will endure the pain together, and we will overcome this together as Americans.”

While the president did not quite sound presidential – his delivery was uneven, and at times self-conscious – it marked an attempt by the Trump administration to take back control of the narrative following the president’s disastrous handling of the Puerto Rico crisis when he engaged in a twitter row with the mayor of San Juan.

But the real political questions were left unanswered. The issue of gun control was not addressed by the president, who has continued to stick to the Republican line of the last few days by claiming now is not the time to discuss gun legislation.

Debate about America’s gun laws is likely to be one of the lasting legacies of the Las Vegas shooting, once the cameras leave the city, and normal service resumes in Washington. As Mr Trump was departing Washington for Las Vegas, senator Dianne Feinstein, a senior Democrat in the senate, unveiled a bill that bans “bump fire stocks” – devices that are fitted to semi-automatic weapons in order to simulate automatic fire. At least 12 of the 27 weapons discovered in the gunman’s hotel suite were fitted with the devices.

But the proposal was unlikely to get much support from Republicans. In an interview on Wednesday, Steve Scalise, the Republican congressman who was shot by a lone gunman during a baseball practice in Alexandria, Virginia in June, sought to avoid the issue. “I think it’s a shame that the day somebody hears about a shooting, the first thing they think about is, how can I go promote my gun control agenda, as opposed to saying, how do I go pray and help the families that are suffering?” he said in an interview with the Washington Post.

As America begins to look to the future after the horror of Sunday’s attack, the issue of gun control may emerge as another contentious political issue for the Trump administration in the weeks and months ahead. But with Republicans controlling Congress, any real reform of gun laws seems unlikely.