Russia’s intervention in Syria has given it regional clout

Second anniversary of Kremlin decision to back Assad with military might 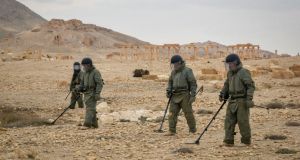 Russian sappers clearing the historic city of Palmyra of mines after it was recaptured from Isis. Photograph: TASS via Getty Images

This week marks the second anniversary of Russia’s direct armed intervention on the Syrian government side, which turned the tide in its favour in the 6½-year war.

Moscow took action, belatedly, in response to advances on the ground by Saudi- and Qatari- sponsored jihadis. Russia’s aim was to ensure the survival of Syria as a state, preserve its government – a traditional ally – and prevent radical fundamentalists from using Syria as a base to infiltrate fighters into the Russian Federation’s Muslim republics.

Moscow began by providing air cover for the Syrian army and allied militias in offensives to regain control of cities, towns and villages occupied by insurgents while Lebanon’s Hizbullah, Iran and Iraq deployed fighters to bolster overstretched Syrian ground forces.

The initial objective was to secure Damascus, its suburbs, and the country’s western and central populated areas while containing al-Qaeda offshoots, Jabhat Fatah al-Sham (formerly Jabhat al-Nusra) and Islamic State.

The Russian military’s presence ineluctably expanded with the dispatch of advisers and deminers and secondment of senior officers to the Syrian army.

Moscow’s first high-profile action was in March 2016 when Russian war planes aided a Syrian ground offensive to retake the ancient city of Palmyra, overrun by Islamic State in May 2015. Once the city was secured, Russian sappers blew up unexploded ordnance. After jihadis returned that December, Russian aircraft supported Syrian forces in their effort to regain the site.

In September 2016, government and allied forces, bolstered by Russian airpower, launched an operation to drive insurgents from the eastern sectors of Aleppo. In December, the Syrian army routed the insurgents, proclaimed victory and made it clear to opponents of President Bashar al-Assad he was not stepping down anytime soon.

Consequently, Russia is alleged to be responsible for war crimes and crimes against humanity in a war that has killed 350-400,000 combatants and civilians.

Moscow’s commitment has expanded from the military sphere to management of ceasefires and negotiations. From 2012, Russia sought to provide a political route out of the conflict but this effort failed until January 2017 when Moscow and Ankara convened talks between Damascus and armed factions in Astana in Kazakhstan with the aim of ending fighting and promoting negotiations between the government and political opposition.

Subsequent meetings in Astana have resulted in the creation of ceasefire zones which have reduced violence and prepared the way for a new round of UN-mediated negotiations in Geneva.

There Russia, from a position of strength, will insist its ally, Assad, should remain in power until Syria is stabilised, a demand anti-Assad Arab and Western powers have, reluctantly, conceded to.

Involvement in the Syrian war has not only given Moscow a determining role in Syria but also made Russia a key actor on the regional stage, a role it had abandoned following the demise of the Soviet Union.