‘Does the world have eyes? Tell the world we are humans, not animals’ 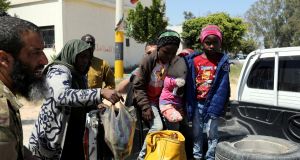 It was night when the baby girl came into the world, in a big hall surrounded by hundreds of refugees and migrants cowering with fear, as fighting between rival Libyan militias echoed outside. Women pulled plastic bags on their hands to help her young Eritrean mother through the labour, as men prayed and panicked about whether aid would come.

The baby was born last September, in Abu Salim detention centre in southwest Tripoli. Afterwards, she was locked up for months: one of thousands of refugees and migrants trapped in indefinite detention in a country without a stable government.

Most of them, like the baby’s mother, tried to reach Italy in the last two years, but were returned to Libya as a direct result of European Union migration policy. Since 2017, the EU has been spending tens of millions of euro to train and equip the Libyan coastguard, which intercepts refugees and migrants trying to escape on flimsy boats across the Mediterranean.

“I just want to get my baby in a perfect place, a good place, and live as a normal person,” the new mother told The Irish Times, using the messaging service WhatsApp. She had escaped Eritrea with her husband, and said she was hoping to secure freedom from a country where human rights abuses are rampant. Like other detainees, she didn’t want to be named for security reasons.

This month, fighting has raged again in Tripoli. On April 4th, eastern renegade Gen Khalifa Haftar ordered his self-styled Libyan National Army to advance on Libya’s capital. For a second time in eight months, Abu Salim was on the front lines. It was the third time for Qasr bin Ghashir detention centre, further south.

About 6,000 refugees and migrants are being held in centres run by Libya’s department for combatting illegal migration, in conditions the former UN human rights chief, Zeid Ra’ad al Hussein, has called “an outrage to to the conscience of humanity”.

Some are willing to be repatriated to their home countries, but many come from places such as Eritrea, Somalia, and Darfur, in Sudan, where they fled war or dictatorships, and say they can’t go back. They have little chance at evacuation because of a scarcity of resettlement places. With the escalation in conflict, more than 3,000 are now in areas affected by fighting.

Roughly 400 children are locked up in the Tripoli area, though the United Nations children’s agency (Unicef) says it’s impossible to get an exact number: newborn babies in Libyan detention don’t receive birth certificates, while boys over 14 are treated as men.

“The living conditions in the detention centres are appalling and in no way suitable,” said Unicef Libya spokesperson Mostafa Omar, who also confirmed children in detention receive no education. “Unaccompanied and separated children are living together with adults in the same hangars, with hundreds of people squeezed into a room with poor ventilation, sub-standard food and services.”

Until they were moved to a safer location this week, there were about 20 children under five years old in Abu Salim detention centre, several pregnant women and many more minors.

For months, adult detainees have worried about them growing up damaged or traumatised because of what they have witnessed. “There are small children in this place who should get a basic education,” said one Eritrean who was held there. “They are learning bad things. They don’t even know alphabet letters.”

He said he sometimes sees young children re-enacting abuse, hitting each other with sticks and saying “pay dollar you son of a bitch”.

“Even the words, the actions they use are just like the [people] smugglers. Children are just like a white sheet of paper, we are the ones who should write good things on them,” he said.

The past two weeks of fighting has added to the detainees’ fears.

An Eritrean man in his 30s described the impact two nights of missiles landing close by had on the children he was looking out for. “I asked one of the kids ‘why don’t you go outside to play with your friends?’ She said to me: ‘I don’t want to die because I want to go to my dad. I miss him.’”

Like many others, the six year old’s parents had made the journey separately, and the girl’s father is now in Germany.

“They are in a detention centre, not daycare,” said a teenager held in Abu Salim, who said he has been trying to cheer up younger detainees when they look sad. “The life of other children in the world and [the] life of these kids is like the [difference between the] earth and the sky.”

He is one of dozens of refugees and migrants, held in detention centres across Tripoli, whom The Irish Times has been in regular contact with for the past eight months. Most use hidden phones to communicate, and many have sent GPS locations, photographs, videos and audio recordings to support their stories. Details have been confirmed with international organisations on the ground.

All that time, detainees have repeatedly said it’s inevitable that another conflict will break out in the city, while appealing for evacuation to a safer country. For some of the most traumatised, their prediction proving true has been too much.

On April 11th, a week after Haftar’s forces began their assault on Tripoli, a 17 year old in Abu Salim died by suicide in a septic tank. Friends described Meron as a sweet person, who loved singing and dancing, but said he had become depressed and mentally stressed after torture by smugglers and months of detention. “We will die one by one, either by war, by suicide, by starvation,” said a man who knew him.

For the past two weeks in Qasr bin Ghashir detention centre, 20km south of Abu Salim, about 44 children and 115 women have been among 728 detainees trapped on the front lines, in territory held by Haftar’s forces, surrounded by gunfire and missiles. “About the war, yes, it is still going on and we can hear it,” said a refugee. “It is very much close to us. Heavy weapons fired just outside of our fence.”

A week into the clashes, Libyan authorities and the United Nations refugee agency (UNHCR) made a failed attempt to move the group out of Tripoli. Detainees refused to go, saying they didn’t want to be taken from the city to a place where services are limited and there is little access to international organisations.

The suggested location was Daher al-Jabal detention centre in Zintan, 180km southwest of Tripoli. A child died there late last year from appendicitis, because of a lack of emergency medical care, according to Unicef. He was one of at least 10 detainees who perished after being relocated during conflict last year.

“Does the world have eyes? Tell the world we are humans, not animals. We need help,” said an Eritrean refugee in Daher al-Jabal detention centre, when asked what the conditions are like.

Teenagers trapped in Tripoli’s detention centres in the latest outbreak of fighting face the additional risk of being forced to assist fighters. Two detainees in Tajoura detention centre, south Tripoli, said a 14-year-old boy from Darfur, Sudan, was among dozens of people taken from locked halls in the past few weeks to work on a nearby military base, for a militia fighting in support of the UN-backed Tripoli government.

Others previously held in Ain Zara, southeast Tripoli, said underage boys had been made lift and load weapons there.

When asked about the danger for children trapped in Libya’s migrant detention centres, a spokesperson for the Department of Foreign Affairs said it was monitoring “the extremely worrying situation around Tripoli”.

“Both Ireland and the EU provide financial support to UN agencies, which have a presence on the ground, and are providing assistance to refugees and migrants. UNHCR has been able to move some refugees and migrants to areas of safety, but they are working in very difficult conditions,” he said.

In Qasr bin Ghashir, refugees said things were at crisis point. “The problem we face with women and children is serious. Mothers can’t breastfeed their infants because their breast doesn’t have enough milk,” said an Eritrean. “The reason is a lack of drinking water and enough food to do so.

“The children have become so slow. Sometimes when they are hungry they [try to] cry but they do not have the strength.”