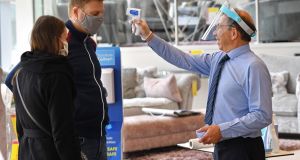 A member of staff wearing a face shield uses a laser thermometer to test a customer’s temperature in a Furniture Village store in Croydon, in southeast London. Photograph: Ben Stansall/AFP via Getty Images

A further 204 people have died with Covid-19 in the UK, the department of health and social care said on Saturday.

This takes the department’s official death toll to 40,465 but does not include all deaths involving Covid-19 across the UK, which is thought to have passed 50,000.

Meanwhile, a group of leading medics and scientists has called on the British government to hold an urgent inquiry to prepare the country for a potential second wave of coronavirus in winter.

In a letter to The Guardian, 27 medical and scientific experts have warned that many more people may die if a second wave hits at the end of the year and the government is without “quick, practical solutions to some of the structural problems that have made implementing an effective (coronavirus) response so difficult”.

Signatories to the letter say issues such as “the fragmentation ... of the NHS, public health and social care ... the channels by which scientific evidence feeds into policy and an inability to plan for necessary goods and services” threaten to undermine the government’s response to a potential future spike.

They write: “Despite strenuous efforts by health professionals and scientists inside and outside government, the UK has experienced one of the highest death rates from Covid-19 in the world, with the poor and certain minority ethnic groups affected especially badly.

“If, as seems probable, there is a second wave this winter, many more will die unless we find quick, practical solutions to some of (these) structural problems,” adds the letter signed by former World Health Organisation director professor Anthony Costello and former Scientific Advisory Group for Emergencies (Sage) member professor Deenan Pillay,

“We call on all political parties to commit to a rapid, transparent, expert inquiry to address these issues. This must avoid diverting the efforts of those responding to the crisis or apportioning blame, but should propose feasible ways to overcome the obstacles faced by those on the frontline of the response and help them to save lives.” – PA