‘All my friends said: O’Neill, you will sell to five friends then be out of business’ 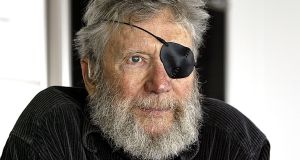 Jack O’Neill, the eye patch-wearing surfing pioneer who helped invent the wetsuit and created one of the world’s best-known surf brands, has died at the age of 94.

O’Neill – who went on in later life to champion marine environmental causes - died of natural causes on Friday at his oceanfront home in Santa Cruz, California, his family said in a statement. He was 94.

The ocean lover - who lost an eye in a surfing accident in the 1970s – wanted to be able to surf longer in the frigid northern California ocean and experimented with various materials to create a lining that made the first neoprene wetsuit wearable.

His death comes a week after California lost another of its treasures: Surfer magazine founder John Severson at age 83. His magazine, which started out as simply a promotional pamphlet for his surf films, became required reading for surfers in the 1960s and carried spellbinding images and tales to an audience starved of such rich media.

O’Neill’s wetsuit discovery came about after he moved with his wife to San Francisco’s Ocean Beach neighbourhood in the early 1950s.

O’Neill said that at the time his friends didn’t have much faith in his invention. “All my friends said, ‘O’Neill, you will sell to five friends on the beach and then you will be out of business,’” he would remark, according to his family.

In San Francisco he opened one of the area’s first surf shops but in 1959 moved his growing family 120km south to Santa Cruz, where he opened his second shop to cater to the city’s growing surf scene.

By the 1980s, O’Neill had become the world’s largest recreation wetsuit designer and manufacturer and the O’Neill surf brand had reached Australia, Europe, Japan and other corners of the globe.

He considered O’Neill Sea Odyssey, a marine and environmental education program for children, his proudest achievement. Founded in 1996, it has taken nearly 100,000 school-aged children in his personal Team O’Neill catamaran to the Monterey bay national marine sanctuary to learn about the ocean.

“The ocean is alive and we’ve got to take care of it,” O’Neill said about the program. “There is no doubt in my mind that the O’Neil Sea Odyssey is the best thing I’ve ever done.”