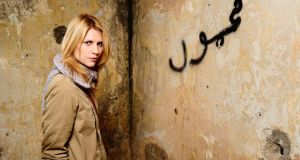 The CIA is not only the most paranoid and insecure agency in town – as bipolar as Clare Danes’s character Carrie in Homeland – it might also be the most image-conscious.

Carrie Mathison may be banished from the fictional CIA on Homeland, but she was welcomed with open arms at the real one on Monday. “Our field trip to Langley,” Claire Danes says wryly. “It did feel like we were in junior high school.” (She should know.)

The actor concedes that life entwining with art was a bit “awkward” in this case, given that both their narratives are under wraps. “There was one long table of CIA folk and then us, directly facing each other like we were ready to rumble,” she says, laughing. “They couldn’t tell us anything about themselves, really, and we couldn’t tell them anything about our show, really. So what kind of conversation could we have?”

It got even stranger when Danes’s freshman roommate from Yale, a former operative who is now a lawyer at Langley, joined the group, dressed, as it happened, like Danes’s character.

Alex Gansa, the co-creator and show runner of Homeland, calls the two-hour meeting at Langley with his stars, writers and executives and a flock of CIA officers “a frank and free exchange about the entertainment business and the intelligence business that revealed a lot of parallels”. He adds: “We both build sets. We both play roles. And we both brainstorm, about operations on their side and storylines on ours.”

Extremist enemies
CIA director John Brennan even ushered his fictional counterpart, Mandy Patinkin, into his office. Patinkin says later that he stared at “the massive leather-bound books” on the conference table, thinking that rather than props, they dealt with “the fate of our world”.

Brennan talked about keeping America’s relentless extremist enemies at bay. (As Patinkin likes to say, when channelling his Inigo Montoya character from The Princess Bride: “I have been in the revenge business so long, now that it’s over, I don’t know what to do with the rest of my life.”)

The actor gives a gripping portrayal of Saul Berenson, the show’s moral centre. (Or, given the themes of duality and duplicity, maybe the mole?) Brennan told the often- distressed father figure to the crazed savant Carrie about his own painful paternal duties meeting with the families of fallen officers.

Why did the gruff Brennan embrace Hollywood? You might think the CIA would be busy with that long-delayed shipment of weapons to the Syrian rebels. But this is not only the most paranoid and insecure agency in town – as bipolar as Danes’s mesmerising Carrie – it might also be the most image-conscious.

The company still shudders at the memory of times when some in Congress have ques- tioned whether the agency should be shuttered or gutted – a fear reflected in the debut of the third season of Homeland on September 29th.

It will depict Senate hearings after a terrorist car bomb explosion at Langley has wiped out the top echelon of CIA officials and ripped apart Carrie and Brody, our favourite deranged, doomed lovers – Romeo and Juliet crossed with Bonnie and Clyde. (“Hurt people hurt people,” as Patinkin likes to say, quoting his wife.)

So the CIA decided to risk any possible opprobrium from New York congressman Peter King, who launched an inquiry, leading to an inspector general investigation, to see if the agency had overshared confidential information with the makers of Zero Dark Thirty, Mark Boal and Kathryn Bigelow.

Agency staffers
A glamorous premiere and reception at the Corcoran Gallery of Art on Monday night hosted by TV channel Showtime and its innovative president of entertainment, David Nevins, attracted a gaggle of current agency staffers as well as Michael Hayden, the former CIA director, and Michael Morell, the former acting CIA director.

José Rodríguez, the ex- head of the CIA’s clandestine service who gave the order to destroy the agency’s torture videotapes, was there, schmoozing. “He chills my blood,” says Gansa. He says the show has consultants who are “still active intelligence officers and a lot of retired intelligence officers.”

The Emmy-winning Danes reveals that her “plasticine, rubbery face” came from her dad. “My dad has no cartilage in his ears,” she said. “I love mushing his face around.” While Carrie may be “transgressive” and deeply flawed, “she’s a little bit of a superhero” who screws up but “ends up saving the day”.

The agency prefers PR about sometimes haywire yet dedicated fictional characters to fumbling real ones. Carrie and Saul – who get a lot more congressional oversight in the new season than the CIA gets in real life – actually boost the agency’s brand.

The CIA would rather talk about nefarious programmes, like targeted killings, than rehash blunders: missing the break-up of the Soviet Union, and Osama’s 9/11 plot; failing to figure out there were no weapons of mass destruction in Iraq and feeling flummoxed over the Arab spring.

Danes muses about their CIA group hug. “Maybe it’s this strange idea that your achievements are never going to be celebrated publicly while your failures are going to be exposed. There must be some urge to have their victories on positive display, even in a fictional context.”