Hillary master of using adversity to her advantage

Benghazi hearing showcased ‘good’ Hillary, but there were flashes of ‘bad’ 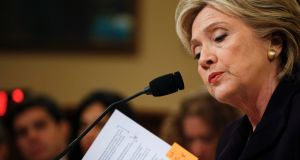 Nobody plays the victim like Hillary. She can wield that label like a wrecking ball. If her husband humiliates her with a girlfriend in the Oval Office, Hillary turns around and uses the sympathy engendered to launch a political career.

Hillary Clinton is never more alluring than when a bunch of pasty-faced, nasty- tongued white men bully her. And she was plenty alluring during her marathon session on Thursday with Republican Lilliputians, who were oblivious to the fact Hillary is always at her most potent when some Neanderthal is trying to put her in her place.

Trey Gowdy and his blithering band of Tea-Partiers went on a fishing expedition, but they forgot to bring their rods – or any fresh facts.

It was a revealing display of hard-core conservatives in their parallel universe, where all their biases are validated by conservative media. They crawled out of the ooze into the sea of cameras, blinking and obtuse. Ohio’s Jim Jordan, bellowing. South Carolina’s Gowdy, sweating. Alabama’s Martha Roby, not getting the joke. And Indiana’s Susan Brooks, allowing that “most of us really don’t know much about Libya”.

They must have been mistaking her for W, who always looked as if he wouldn’t know what to say if his notes blew away in the wind. It is not the terrain of Gowdy’s lame committee, but it is legitimate to examine Clinton’s record in the Middle East. As a senator, she made a political vote to let W invade Iraq. As much homework as she did to get ready for the Libya committee, she chose not to do her homework on Iraq in 2002 – neglecting to read the sketchy national intelligence estimate. She didn’t want to seem like a hippie flower girl flashing a peace sign after 9/11.

Then she urged President Barack Obama to help topple Muammar Gadafy without heeding the painful lesson of Iraq – that if America went into another nebulously defined mission, there would have to be a good plan to prevent the vacuum of power being filled by militant Islamic terrorists.

Since she was, as her aide Jake Sullivan put it, “the public face of the US effort in Libya” – one of the Furies, along with Samantha Power and Susan Rice, who had pushed for a military intervention on humanitarian grounds – Hillary needed to stay on top of it.

She had to be tenacious in figuring out when Libya had deteriorated into such a cauldron of jihadis that our ambassador should either be pulled out or backed up. In June 2012, the British closed their consulate in Benghazi after their ambassador’s convoy was hit by a grenade. A memo she received that August described the security situation in Libya as “a mess”.

According to Republicans on the committee, there were 600 requests from Stevens’s team to upgrade security in Benghazi in 2012 and 20 attacks on the mission compound in the months before the September 11th siege. In a rare moment of lucidity, Rep Mike Pompeo of Kansas said to Clinton: “You described Mr Stevens as having the best knowledge of Libya of anyone”, but “when he asked for increased security, he didn’t get it.”

As Hillary kept explaining, that job was the province of the “security professionals”, four of whom were later criticised for providing “grossly inadequate” security at the Benghazi compound and removed from their posts.

The 11-hour hearing showcased the good Hillary, but there were occasional flashes of the bad. She still doesn’t believe that setting up her own server was so wrong. Even though the inspector general of government intelligence said there was top secret information in her emails, she sticks with her parsing. “There was nothing marked classified on my emails, either sent or received,” she told Jordan.

She seemed oddly detached about Stevens, testifying that he didn’t have her personal email or cell number, “but he had the 24-hour number of the state operations in the state department that can reach me 24/7”. There were no call logs of talks between Stevens and Clinton, and she said she could not remember if she ever spoke to him again after she swore him in, in May.

“I was the boss of ambassadors in 270 countries,” she explained. But Libya was the country where she was the midwife to chaos. And she should have watched that baby like the Lady Hawk she is. – (New York Times service)