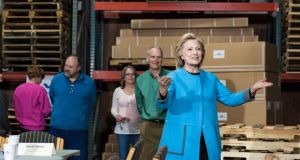 Hillary Clinton meets and greets supporters after a discussion at Whitney Brothers in Keene, New Hampshire, on Monday. New Hampshire will be the first to hold a presidential primary. Photograph: The New York Times

The event is beautifully staged: the owner of the business and six employees sit around as Hillary Rodham Clinton fields questions and shares her views on what she would do if elected US president.

It is the perfect tableau for the dozens of media people who outnumber the 40 employees watching the former secretary of state at Whitney Brothers, the childrens’ toy and furniture maker in the town of Keene (population 23,409) in the rural hills of southern New Hampshire.

The presidential candidate appears engaged in conversation, trying to connect with voters about what’s on their minds, all in the public eye.

On Monday afternoon, in this factory, the choreographed scene resembled that time when the school inspector called upon the teacher in the classroom: everyone on their best behaviour, everyone asking the right questions, everyone looking focused, serious and sincere.

The scene differed sharply from the lively townhall-style events at the weekend when many from the packed field of Republicans travelled to the Granite State for a candidate forum organised by the state’s Republican Party. Various questions were thrown at the candidates.

The contrast captures the very different races being run in the two parties: a crowded field in one and a likely coronation in the other.

There were no sharp-edged questions in this workshop, just a smooth discussion with a Democrat that was well short on hard policies. The topics ranged from drug abuse to community college education to upskilling workers to tax relief for small businesses.

New Hampshire will be the first to hold a presidential primary and the second state after Iowa, in January, to pick party nominees on the road to the presidential election on November 8th, 2016.

“We don’t really get too close to the national political leaders so that was really the first time, up close and personal, I had a chance to meet her, listen to her, talk to her. She seemed like a pretty genuine person. I was impressed,” Whitney Brothers owner David Stabler told The Irish Times afterwards. He was so impressed that he said he would vote for her. He last remembers voting Republican, for John McCain in 2000.

Clinton, eight days after declaring her candidacy, is in the second state on a listening tour aimed at earning votes as a “champion for everyday Americans” and dispelling any notion she is taking anything for granted eight years after losing her first presidential bid to a better-organised rival, then senator Barack Obama of Illinois.

On Monday, Clinton moved on to New Hampshire. Yesterday she participated in a roundtable discussion with students and teachers at a community college in the state capital, Concord.

The northeastern state has been good to her and her husband. Bill Clinton’s second-place finish in New Hampshire in 1992 rejuvenated his campaign and made him “The Comeback Kid” on his way to winning the Democratic nomination and the White House.

Hillary’s victory here in 2008, the first by a woman in a presidential primary, was more of a comeback as she won in a surprise victory after losing Iowa to Obama. A repeat victory here eight years on seems assured right now in the absence of any serious challenger, as Clinton is six-to-one ahead in the polls to Massachusetts Senator Elizabeth Warren, a favourite with grassroots progressives on the far Democratic left who has said she is not running.

“I imagine some New Hampshire Democratic activists look enviously at their Republican counterparts and say, ‘gee I wish we were getting the attention they will be getting over the next several months with all these candidates competing for the support of activists’,” said Dante Scala, a politics professor at the University of New Hampshire.

Not all Democrats in Keene are happy with Hillary.

“I would rather that it would be Elizabeth Warren or Bernie Sanders” – the socialist independent senator from neighbouring Vermont – said Barbara Hull Richardson (92), a Keene resident standing in the cold outside Whitney Brothers waiting for a glimpse of Hillary.

“They are more progressive. Hillary has to move away from Wall Street. She is just too much into the 1 per cent versus the 99 per cent.”

Afterwards, she was asked by reporters about her rich benefactors, namely about revelations in an upcoming book, Clinton Cash by Peter Schweizer, a former adviser to George W Bush, which claims that US policy changed to help donors to her family’s charitable foundation.

“Republicans seem to be talking only about me,” she noted, adding that she wanted to hear what concerns people in New Hampshire.

“I want people to know that I’m listening and I’m accessible, and I’m running a campaign about them,” she said.

Some people the former senator and first lady met in New Hampshire have a long way to go before they make up their minds.

“I have to reserve my opinion,” said Marsha DuBois (72), whose Kristin’s bistro and bakery (owned with her daughter) in Keene Clinton visited to glad-hand the grassroots and pose for the customary politician-with-baby campaign photo. “We are just starting. I need to hear a little more.”